The purpose of this article is to examine in a concise manner Kobe Bryant’s chart with Chinese Astrology. The American basketball legend died on the 26th of January, 2020, at the age of 41. Those that are interested in seeing a more in depth BaZi chart reading, can find one here.

It has to be said that aside from Kobe, eight more people were killed in the same helicopter crash, one of them being his second daughter, Gianna/Gigi. I will not look at their natal charts as I do not have their data and it would become quite long.

Kobe Bryant was born on the 23rd of August, 1978. in Philadelphia, PA, USA. The given hour of birth is 5 pm, which, when the daylight saving time is removed and the local apparent time is calculated, gives the hour of Yang Earth Monkey. I would like to note that the hour of birth is not vital in the current horoscope, as the structure of the latter is easily verifiable, as I will demonstrate. In other words, even if the time of birth turns out to be wrong, it will not change the useful and harmful elements in Kobe Bryant’s chart. 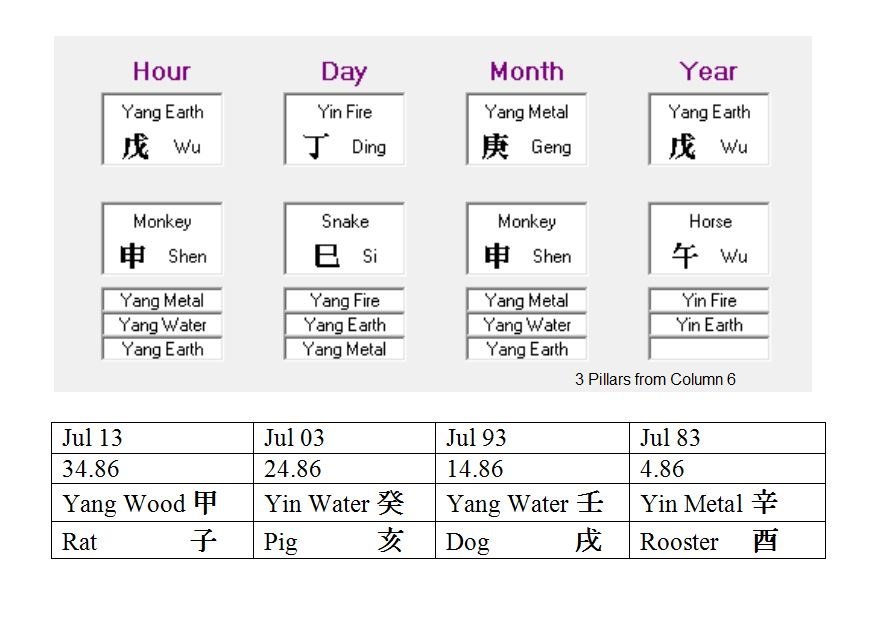 The first thing that I notice is that Kobe Bryant has 3 Pillars from Column 6 of the Sexagenery cycle. In other words, 3 of his 4 pillars fall in a single column out of 6. This is a highly auspicious indication in Chinese Astrology which not many people have.

Lily Chung writes that this configuration makes the native be destined for quick wealth and fame without much effort. Jerry King adds that people with this configuration often rise to fame much easier. This is very true of Kobe Bryant who rose to success, stardom and wealth even more quickly than Michael Jordan or other all-time greats.

At first glance, Kobe Bryant’s chart seems to fall into the category of standard charts, with a weak Day Master. In other words, it needs the resource/seal and the companion element – Wood and Fire.

One could even claim that the self is strong because of the presence of the Snake and the Horse. This is definitely not the case since the Snake combines with the Monkey and gives Water, which is possible because Kobe was born in the fall when Metal rules and produces Water.

If Kobe Bryant was a weak self, this would mean that the Goat would be one of his most favourable symbols, as it completes the Summer Seasonal Combination of Snake-Horse-Goat, giving Fire and strengthening the self.  In fact, at the very end of June and mid-July (the Goat month began on the 30th of June in the lunar calendar) 2003 (the year of the Yin Water Goat), Kobe Bryant was arrested on charges of sexual assault. Subsequently, he got away with it, but not without damaging his reputation and incurring financial losses of millions.

In addition, he underwent knee surgery during the same year. The annual Yin Water combined with the natal Yang Earth and transformed into Fire, which is the most negative element for Kobe along with Wood.

The next annual Goat was 2015 – with Yin Wood on the stem. Kobe Bryant marked his weakest career season and got a calf injury.

In fact, his problems started from the previous year – that of the Yang Wood Horse, when he sustained a severe injury and underwent surgery. Again, the Horse being Fire + the Wood in the stem are the most negative elements for Bryant. If he were a weak self, then she would have become a Dominant self during this period and reaped enormous success.

The top achievements of the Black Mamba

Conversely, if Kobe were a strong self/rivals chart, then Earth/the output element and Water/ control/power element would be the most useful to him, and the Metal/wealth element would be unfavourable.

The fact that his 5 championship titles were won in 2000-2002, 2009 and 2010, namely Yang Metal, Yin Metal, Yang Water, Yin Earth and Yang Metal (since the playoffs are played in June, then it is the stem that rules the first part of the year to a greater extent, than the branch), as well as winning the MVP (Most Valuable Player of the Season) Award in 2008 (Yang Earth), is telling enough.

I mean that Kobe Bryant’s BaZi chart is not standard but falls into a special category, in the case of Follow/Surrender to Wealth. Thus, the most useful elements are Earth/output and Metal/wealth.

Water is also useful, but not the Rat and the Dragon, which force the Monkeys to combine with them and transform into Water. Not only that, but it causes what the Chinese call  “a fight to combine,” which has extremely adverse effects.

The Pig, which is the Nobleman star, is very negative as it clashes with the Snake and destroys it, and hence damages the chart structure.

Because Kobe Bryant is one of the greatest basketball players in history, his fate was such that it seriously affected/even predetermined the overall performance of his Los Angeles Lakers team. This began especially when Kobe started playing regularly in the starting 5 and was not just getting minutes of playing time. I admit that I didn’t look at the BaZi charts of his teammates or coaches, but the fact that when Bryant’s favorable elements ruled his chart his team registered its greatest successes, is easily verifiable.

On the contrary, when the negative elements ruled the times, Lakers had almost no success. The exception was 2004, when they reached the championship finals, but were soundly defeated by Detroit 4-1. The negative annual Yang Wood ruled the year, but the 5 year cycle was Yin Water, which is more favorable than unfavourable.

Enough about Kobe Bryant’s achievements. I will briefly examine his character.

In short, what are the distinguishing and key character traits in Kobe Bryant’s horoscope according to Chinese Astrology?

The Hurting Officer/Yang Earth protrudes twice, followed by Direct Wealth/Yang Metal. This makes him an exceptional leader, inclined to take risks, not to follow the traditional approach, stubborn, distinguished by his differences and oddities, a man of extremes, would not give up unless he reaches number 1, hyper-ambitious, selfish, exceptional performer before the public ( not just for basketball), a speaker who is ready to shine by demonstrating what he is capable of and what he excels at. To this is added incredible hard work, tenacity, frugality, but also parsimony/stinginess.

It was because of the characteristics of the Hurting Officer that Lakers coach, Phil Jackson (who was Michael Jordan’s coach in Chicago), came to write that Kobe was “un-coachable”! This was not a compliment! It was a very negative assessment, which means that Bryant did not listen/was not subject to coaching instructions and recommendations.

It was also due to the Huring Officer, specifically being Yang Earth, the most stubbourn mountain, that Kobe was famous for trying again and again and failing in situations with smaller odds. Phil Jackson, who coached Bryant for many years, stated that Bryant “tends to force the action, especially when the game isn’t going his way. When his shot is off, Kobe will pound away relentlessly until his luck turns. According to Bryant, “I would go 0 for 30 before I would go 0 for 9; 0 for 9 means you beat yourself, you psyched yourself out of the game”.

Kobe’s character in his personal life

Because of the Hurting Officer, Kobe’s parents did not approve of his marriage to his non-African American partner. Subsequently, neither they, nor his sisters, nor his teammates, nor his agent, went to Kobe and Vanessa’s wedding. I am referring to the character of the Hurting Officer not to follow the traditional approach and to do something out of spite, if necessary, only to do his own thing.

Kobe and Vanessa married in 2001, the year of the Yin Metal Snake. The Snake not only duplicated his Spouse Palace but also contained the Wealth star – the wife for males. This is a classical BaZi indication for marriage. I must add that the relationship between Kobe and his parents was restored after the birth of his first child.

And yet, the relationship was probably not fully restored, since in 2013 Kobe had a legal disagreement with his mother and an auction house over $450,000. Before the scheduled trial, a settlement was reached and his parents apologized to him for the misunderstanding in a written statement, and appreciated the financial support he had given them over the years. Even though Bryant had earned a few hundred million dollars, his parents were allowed to keep less than 10% of the 450K. These characteristics come from the Direct Wealth.

As I’ve written before, Astrology shows character and a person’s doesn’t change. This is not a criticism of Kobe Bryant. He succeeded precisely because of these traits of his!

The more attentive readers must have noticed that Kobe Bryant’s BaZi chart contains no Wood. This is not a negative indication as it belongs to the category of special charts. As with Donald Trump’s BaZi chart, which lacks Water, the lack of an element is not, in principle, one of the most serious factors in BaZi chart analysis.

Although the Rat is in opposition to the Horse, which is a positive clash as it removes a potential resource element for Kobe, the Rat wants to combine with both Monkeys and transform them into Water. This is a terribly negative indication, and for two reasons:

1) it changes the structure of the chart

2) it creates a fight to combine with the Snake

As for the year of death, the 26th of January 2020 fell in the year of Yin Earth Pig. The Pig clashes with the Snake, which is also a pretty negative indication as it breaks the combination between the Snake and the Monkey, which is the horoscope structure.

As for the day of death, Kobe died on the day of Yang Earth Dragon. The Dragon is also terribly negative because, like the Rat, it breaks down the structure of the horoscope, because it forces the Monkeys to combine with it.

Here are 3 other negative events that happened in the month of the Dragon:

April 2013. (Yang Fire Dragon) tore his Achilles tendon and was out for 7 months

Notice that while in all three cases happened during the cycle of the Pig, the last one was also the year of the Yin Water Snake. In other words, these are the same two Chinese zoidia/branches that clash each other, and he got the most serious affliction.

With the Pig of the year, + the 2 Monkeys and the natal Snake, all being Traveling Horse stars in Chinese Astrology, it is worth mentioning that Kobe Bryant died while traveling.

In conclusion, Chinese Astrology shows once again that having a superb chart that promises immense glory, wealth and heritage does not guarantee a long (or happy) life. This is even truer when there is a series of negative Luck Pillars + adverse years combined with them.

Kobe Bryant’s earthly journey is over, but his legacy and glory will remain.

Any cookies that may not be particularly necessary for the website to function and is used specifically to collect user personal data via analytics, ads, other embedded contents are termed as non-necessary cookies. It is mandatory to procure user consent prior to running these cookies on your website.