A few years ago, I wrote the article Missing Hour Pillar in BaZi and Chart Rectification. In it I wrote that while the BaZi type of Chinese Astrology can be used without a time of birth/Hour Pillar, knowing your time of birth in Chinese Metaphysics is a must for Zi Wei Dou Shu. The time of birth is also required for He Luo Li Shu aka Yi Jing/I Ching Astrology.

The purpose of that article was to explain that the procedure of finding out the time of birth when it is either unknown or approximate, called rectification in Western and Indian Astrology, can only be done, on a consistent basis, with ancient methods. As such, those who do not know their time of birth but need it for a Chinese Astrology or Metaphysics reading, would need to locate a competent astrologer who can rectify their chart for them. I myself specialize in this. Also, since writing that article, I have begun to offer my Astrology Rectification Course to those that would like to learn how to discover the Hour Pillar when it is unknown or approximate.

The reason for writing the present article is to illustrate how the reverse is possible, that is, how BaZi with unknown Hour Pillar might help in rectification of a Western or Indian horoscope. I want to stress that I emphasize the word might.  As you will see, for BaZi reading to be useful in rectification, the chart ought to look in a certain way/have a certain structure.

The chart I have selected to illustrate my point is of the legendary Bulgarian theatre actress Stoyanka Mutafova. She lived for 97 years, 70 of which she spent on the stage and won numerous awards, some of which are bestowed by the Bulgarian state institutions and are rare and very prestigious. She acted until her year of death, 2019, and could have won the Guinness World Records in the category of oldest acting actress, though it turned out there was another acting actress which was older than her.

Stoyanka Mutafova was born on 2nd of February 1922 in Sofia, Bulgaria, with unknown time of birth. Her birth name is Stoyana-Maria but due to a mistake she became known as Stoyanka –as she is known to millions of people.

Checking the Ten Thousand Calendar, Stoyanka Mutafova was born in the yearly grey area. This poses a problem because she was born not just in a different month but in a different year. Here is her chart with the solar calendar, with rounded Luck Pillars: 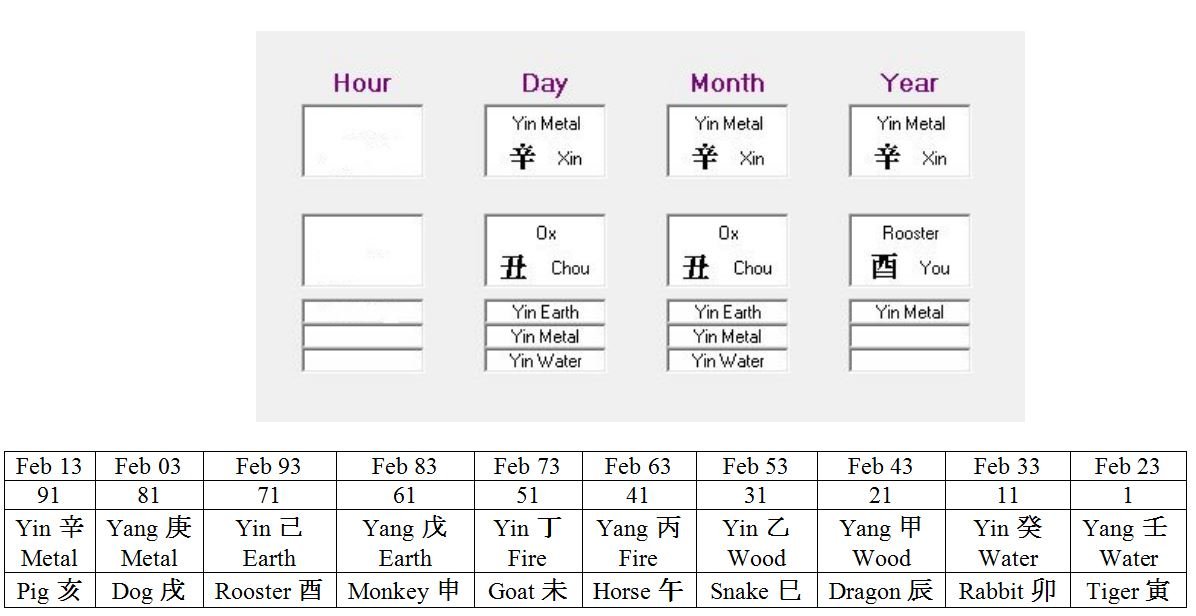 Here is her chart in the lunar calendar, with rounded Luck Pillars: 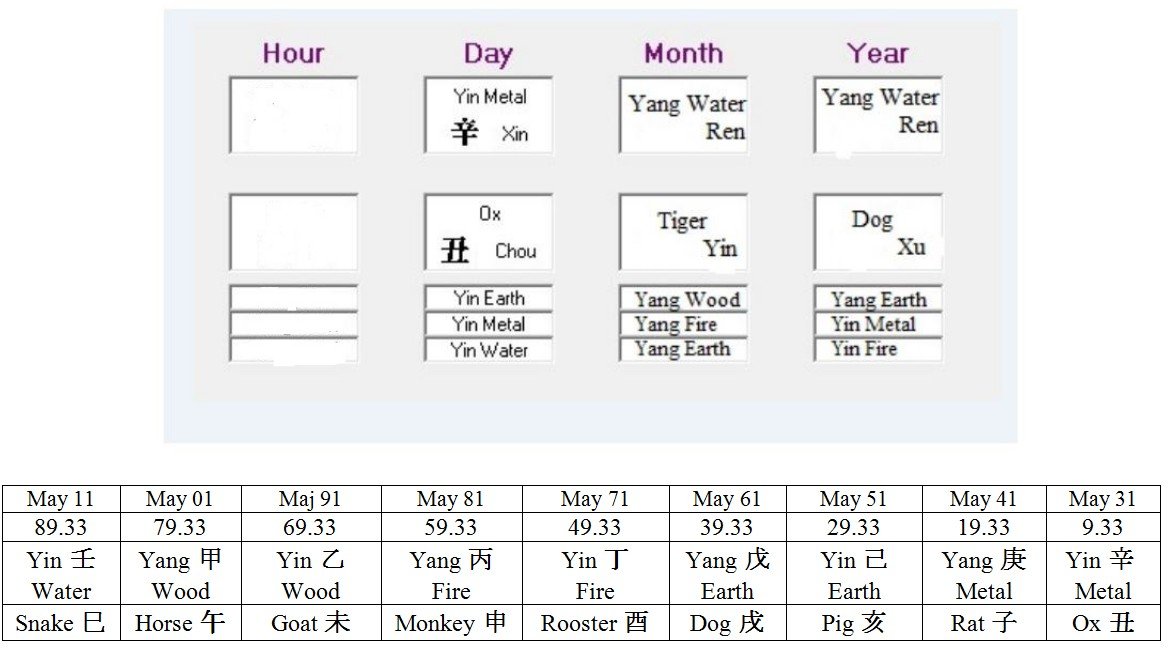 As you see, the Luck Pillars are very different as well, because the polarity of the year changes and, in the lunar calendar, she becomes a Yang female – the LP move backwards, which is not the case in the solar calendar.

Here is a short biography of her in English:

Obviously, since Stoyanka Mutafova is Bulgarian, almost all of the biographical information about her is in her native language. Those that are interested in studying her life in detail can either use online translation or some other method. As I am a native Bulgarian speaker and a BaZi and Ancient Astrology practitioner, I was easily able to find pages and pages of information on Stoyanka Mutafova’s life.

As there are two possible horoscopes, and only of them can be the correct one, a detailed study of her life is required in order to show which chart matches it better.

What tempted me to study Stoyanka Mutafova’s life was the timing of her death. When I heard that she died, I had to check her chart for the extreme success and longevity. She died on 6 December 2019, at age 97 and a little over 9 months, that is, in the Pig cycle, in a Pig year and in a Pig month (the Pig month and cycle is according to the solar calendar).

After studying her life in detail, I judged that the solar calendar reflects her BaZi chart much better than the lunar calendar. Of course, before I did that, I had to determine her chart structure. As this is not the purpose of the article, I will be very brief.

Stoyanka Mutafova was born on an Yin Metal Ox day, 2 days before the change of the year. She has a Dominant Metal chart due to all her Stems and Branches being Metal.

As for why the solar calendar is the correct one, aside from her death, which was shown extremely unambiguously, she won three of the most prestigious awards (awarded by the Bulgarian national institutions) in 1962 (no month), in 2001, and in January 2002.

Conversely, since the Snake is the most useful Stem or Branch in her chart, the Pig, which clashes the Snake would be one of the most negative symbols. I say “one” because the time of birth is unknown.

Another important event in her life was the death of her 3rd husband, the love of her life, Neycho, on 20th of March 1974. 1974 was the year of the Yang Wood Tiger and Yin Fire Rabbit month – two other very negative symbols for Stoyanka, as Wood is Wealth in her chart and Wealth and Power are the two negative elements for Dominant selves.

Also, on 22nd of October 2015 she suffered a brain concussion. It was the year of the Yin Wood Goat, as well as a Goat day. Of course, Wood is very negative, but the Goat is even more so because it clashes with the 2 Oxen and disrupts the Metal flow.

So, taking into account the facts I just presented, could BaZi help in the rectification of Stoyanka Mutafova’s chart? Well, it might do so in this case. Knowing now that she indeed has a Dominant Metal chart, as well as that she died in a Pig cycle, Pig year and Pig month, it would make very good sense that either the Pig, containing Yang Wood, one of the negative elements, combines to make more Wood, or it destroys or afflicts some Branch that is useful to the Metal flow.

Therefore, following this good logic, Stoyanka Mutafova was likely born either in:

The (Yin Metal) Rabbit hour – the Rabbit combines with the LP and annual Pig to make Wood;

The (Yang Metal) Tiger hour – the Tiger combines with the LP and annual Pig to make Wood;

The (Yin Water) Snake hour – the Pig clashes the Snake;

The (Yin Wood) Goat – the Goat combines with the LP and annual Pig to make Wood.

That is how there can be a connection between Chinese Astrology and rectification without time of birth. I mean in the sense that BaZi can help Western Astrology. However, as you see, this is chart dependent and does not happen often. Of course, I am not saying that is all BaZi can help with, but any help in birth time rectification is appreciated.

Naturally, the question arises: can one guarantee that Stoyanka Mutafova was indeed born during with one of these 4 Hour Pillars? I don’t think so.

However, the point here is that BaZi that might be of help to Ancient Astrology in cases of unknown time of birth, before one even calculates the planetary positions for the day of birth.

The importance of sect in birth time rectification: nocturnal vs diurnal Hour Pillars in BaZi

Well, because whether a person is born during the day or night is extremely important in Ancient Astrology. It is important in BaZi as well, but not nearly as much. I mean, Yang Earth, Yin Earth, Yin Fire Day Masters, among other things.

One could also note that Stoyanka Mutafova’s Ancient Western astrological chart has configurations which are more powerful if she was born during the day, etc, etc. I am referring to the testimony by trine between the Sun and the star Jupiter, with the star of Jupiter making a morning station. Also, the beholding by trine between the Sun and the exalted star of Saturn, the domicile lord of the Sun.

Conclusion on Chinese Astrology and rectification

Of course, this is only a preliminary, overall examination in the BaZi destiny analysis. Nevertheless, this specific chart clearly shows how BaZi chart reading can be extremely useful in chart rectification.

Please note that the above does not necessarily mean that Stoyanka Mutafova was born during the day. One would have to set aside a good amount of time to study her life in detail before they can conclude this with any degree of certainty. Well, it so happens that I was captivated by Stoyanka Mutafova’s chart that I did indeed study her life in detail these days and was able to rectify her chart to the minute. My final result is not what is important. What is important is to keep in mind how in cases with missing Hour Pillar one would do well to keep in mind the connection between Chinese Astrology and rectification. Needless to say, to be in a position to do that, the astrologer must be very well versed in both these destiny systems.