The purpose of this article is to show what the correct nocturnal Firdaria sequence is. In short, the 13th century astrologer Guido Bonatti was right and Abu Mashar, Al Biruni and all others were wrong.

Fardar, also known as Firdiariyat or Firdaria, etc is an ancient astrological predictive technique. It actually originated in Babylon and was then transmitted to the Persians, who transmitted it to the Arabs. It might have gone to India as well.

I learned it from Robert Zoller’s courses. Zoller calls it Firdaria and therefore so do I. Firdaria is an extremely useful predictive technique. It can also be used for chart rectification, and I have included it in my Astrology rectification course.

As my approach is above all practical and many other astrologers have already written about the technicalities of calculating Firdaria, I will be very brief. There is no issue about calculating it in diurnal charts, that is, horoscopes of people born during the day.

The issue, at least in theory, is with the nocturnal sequence of Firdaria, namely whether to place the North and South Node. They are placed either after the star of Mars at age 42, or after the star of Mercury at age 70, to conclude the sequence, as they do in the diurnal charts.

The Nocturnal Firdaria sequence variation between Bonatti, Abu Mashar, Al Biruni and all others

All ancient astrological authors, save 13th century Guido Bonatti, say the Nodes go at the end of the nocturnal sequence. The issue is that not one of these ancient astrologers showed how to use the method with a real-life chart. That is not a problem for the practically oriented astrologers among us though.

Robert Zoller states that the Bonatti was right and Abu Mashar was wrong. In other words, the Nodes go after Mars. Zoller bases this on his decades-long astrological experience.

His student Regulus Astrology also says that. Moreover, he even proved it in his book A Rectification Manual, with real-life example charts.

I also say that Bonatti was right and Abu Mashar, Al Biruni and all the others astrologers were wrong about the nocturnal Firdaria. I exemplify it in my course.

I recently saw a stunning example of that, which I will share the necessary parts with my readers in this article.

Note: As every serious astrological software can calculate this ancient predictive technique, as well as there are online calculators for it, I have only inserted the general/major periods in my image of the Nocturnal Firdaria sequence. Each period, except for those of the Head and Tail, gets subdivided into 7 equal parts distributed to each the planets, with the general/major lord always getting the first subperiod.

This is the natal chart of an acquaintance of mine. I have erased the data for the purposes of confidentiality and will only provide the most basic details. They will more than do the job. Otherwise, I would be tempted to go down to the monthly charts and would have to examine the ingresses. 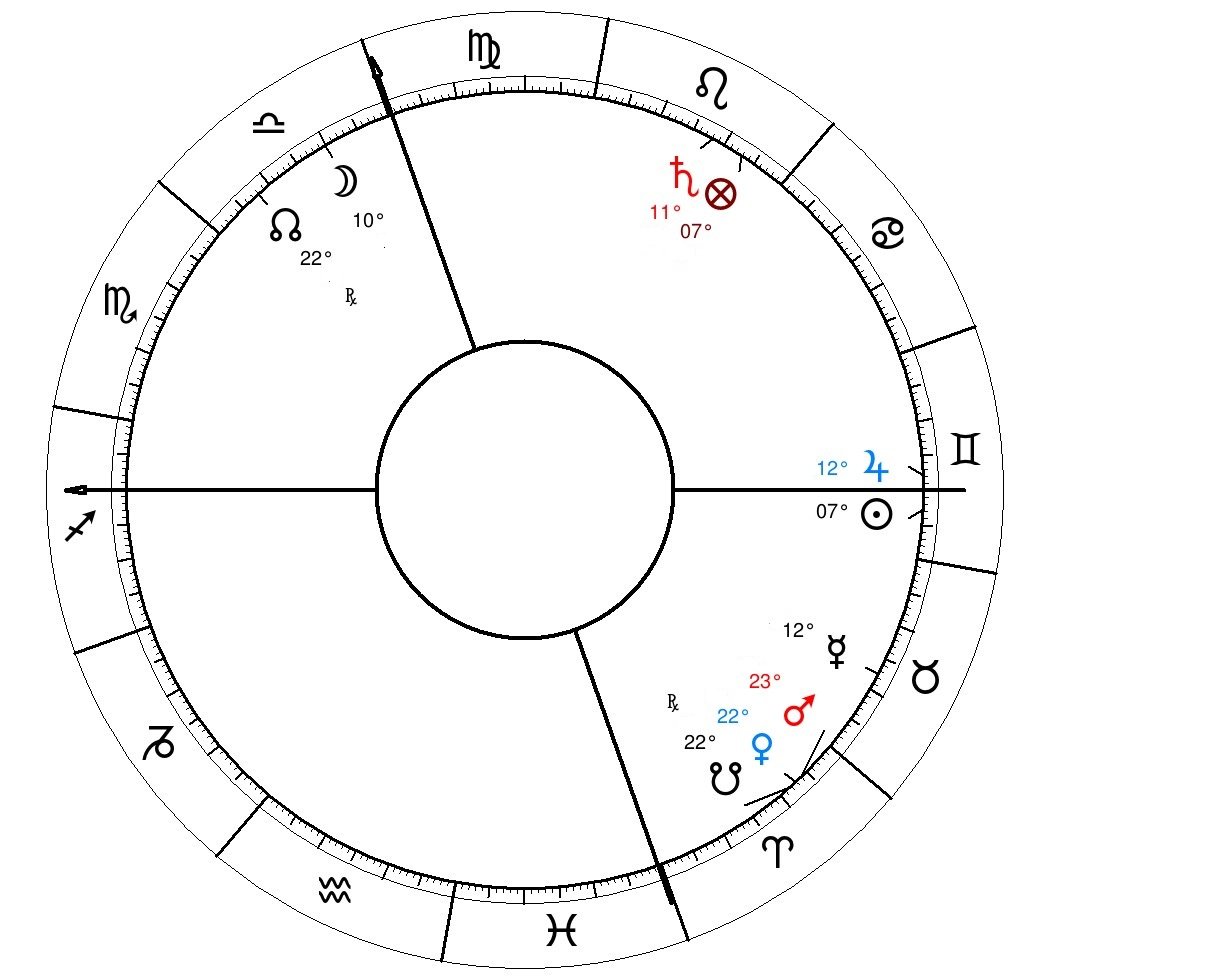 As can be seen, she has a night chart with Sag Rising and therefore Aries is the 5th of children, ruled by the star of Mars. While the star of Mars is there and hence in its domicile, confine, oriental and of the sect, it is very afflicted by the close bodily conjunction with the South Node/Tail.

As the stars of Mars and Venus both have to do with injuries and diseases involving the reproductive system, this is the common and clear vulnerable body part/system of the native’s children. This is also confirmed by both stars regarding the Lot of Children by a diameter. The kidneys and lower back are the second one, and so are the head and throat.

This severe affliction to the topic of children was, sooner or later, going to get activated.

I am sure that some of you have already anticipated what I am about to show:

As you can see from the Nocturnal Firdaria sequence by Bonatti, the Tail/South Node took over from the Head/North Node and became a Ruler of the Times for 2 years. 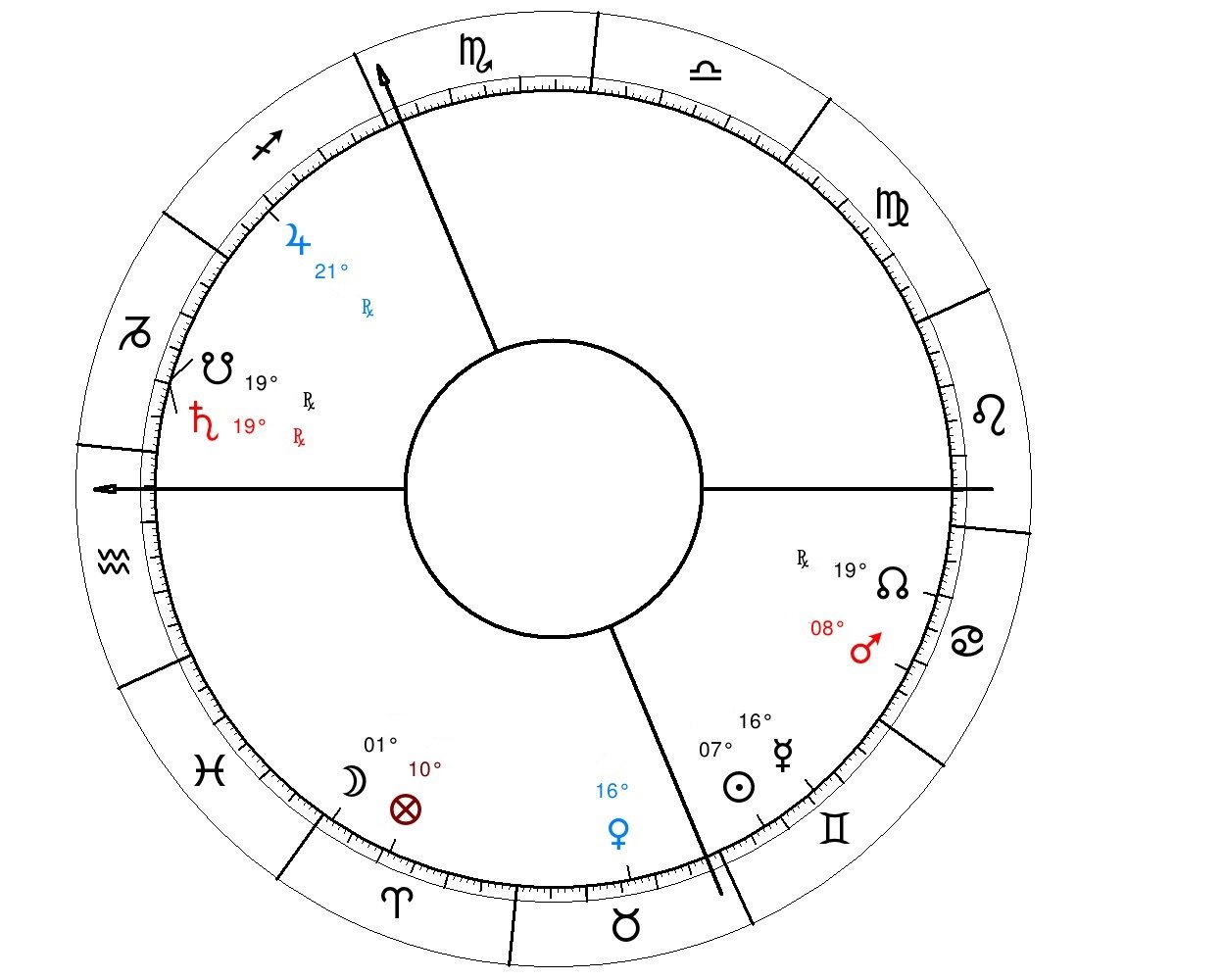 Here is the 2019 SR superimposed on the nativity: 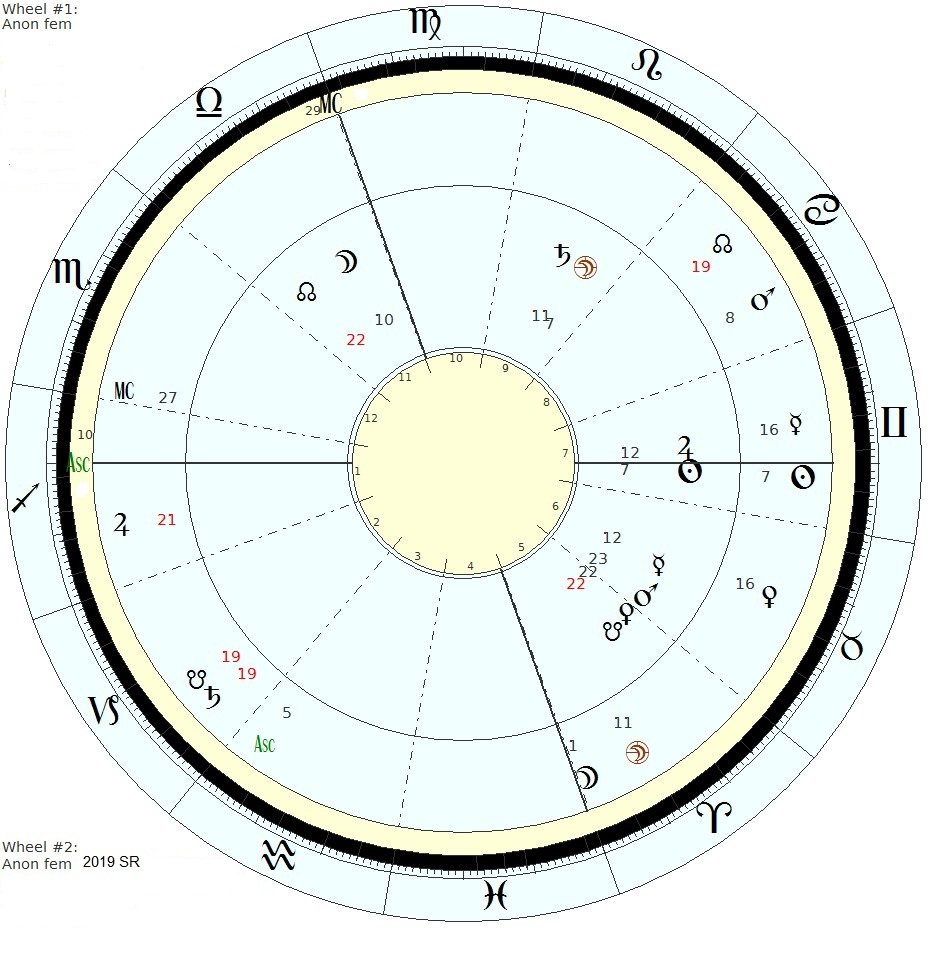 Of course, by solar revolution, I do not mean the modern “solar return” but the annual suite of ancient predictive techniques. As I said, I will be very brief. As such, I will not be examining all the techniques and the current Rulers of the Times. Abu Mashar in his Persian Nativities IV, chapter 2, translated by Ben Dykes, orders the hierarchy of annual predictive techniques in the following way:

1) The Profected Asc and its lord;

2) The Distribution and its lord;

The point being here is that Firdaria is higher than the SR and its lord.

Where is the Tail in the SR? It is partile conjunct the lord of the SR, the star of Saturn. As such, it brings forth its natal significations even more. As if that were not enough, it is conjunct the natal Asc by antiscion!

If this activation was not enough, SR Mars, at 8 Cancer, overcomes and scrutinizes the natal Lot of Children, at 10 Lib. Moreover, that Lot is also regarded by a square by the other malefic, the star of Saturn in the SR.

If one wants to even calculate the SR position of the Lot of Children, it falls at about 6 Capricorn. It is scrutinized by an opposition by SR Mars from the 6th of injury and illness and conjunct SR Saturn, in the 12th of serious illness.

I already delineated earlier what the Tail promises. So what happened?

What happened this year

The native has 2 children. In September 2019, her first child, a girl, was hospitalized due to an acute problem which the doctors said that if the problem had been discovered and acted upon 1-2 days later, she would have died. I have the dates and specifics but they are not that necessary. What is important is that the native’s child had to undergo immediate surgery which involved her reproductive system.

Unfortunately, the year was not over for the native. In February 2020, her second child, a boy, was hospitalized this time. And, yes, the reason had to do with his reproductive system, although a different body part. I am not certain whether surgery was performed, but what I know is that the second child’s problem was nowhere near as severe as that of the first one.

Unfortunately, the year was not yet over for the native! In fact, before the hospitalization of her kids, the condition of the native’s brother deteriorated and he had to be hospitalized due to mental issues. I believe they even had to increase the dose of his medications.

Notice that the natal 3rd Rises and the SR South Node is partile conjunct the star of Saturn, the lord of the 3rd of siblings. This same South Node/Tail, which took over the rulership of the times in Firdaria.

One would also notice that the star of Mars is SR lord 3 of siblings, placed in the SR 6th of illness/injury and testifying by an opposition to SR L12 of serious illness.

How was the native, one might wonder, given what happened? Well, the SR Tail conjunct the Asc also afflicted her body, but the presence of the benefic star of Jupiter ingressing/transiting through the natal Asc protected her. However, she suffered much in her soul, as the star of Mars opposes by antiscion that same natal lord 1, the star of Jupiter. This latter conclusion is also reached because the SR Ascendant was safe, but its lord, the star of Saturn was afflicted, showing the condition of the native’s soul this year.

We saw what the nocturnal Firdaria sequence used by Bonatti, Robert Zoller, Regulus Astrology and myself showed. I mean the Tail/South Node ruling the times by itself. What does the one given by Abu Mashar, Al Biruni and all others show?

My reply is that the symbolism does not match at all. Also, being in a place, let alone also ruling it by domicile, is much more powerful than the exaltation rulership and being placed elsewhere.

Now, one might say that the SR chart showed the affliction. This is also true, but why now, and why such a severe one? Because the Tail became a primary Ruler of the Times, and because, as Abu Mashar points out, Firdaria is more authoritative the Solar Revolution. 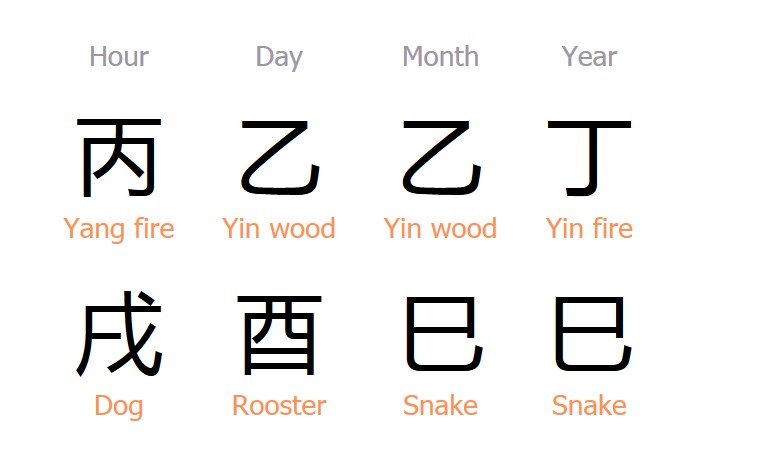 For those that are wondering what the native’s BaZi chart shows for this year, suffice it to say that her month branch, the Snake, was destroyed by the annual Yin Earth Pig (from 4 Feb 2019 until 4 Feb 2020).

My thanks to Victor for his free BaZi chart calculator:

The month branch is generally considered the most important part of the BaZi chart. In this nativity, it is even truer than this, because the Snake sets her whole horoscope structure. The Pig contains Wood, the native’s Companion element. It thus shows her brother being harmed, as an opposition/clash always works two ways. In short, this has been an extremely challenging year for the native.

Firdaria is a very useful ancient predictive technique. It is even more impressive/authoritative when both the South/North Node and its domicile lord are bodily conjunct. This is because that planet’s significations are shown in the most direct way in such cases, as this horoscope exemplifies.

I trust that this article will be of help to those who might want to use Firdaria and yet wonder which sequence to use for nocturnal charts, due to the many articles which mostly address the technical and historical side of the technique and merely quote sources rather than address the issue with a telling real-life example.