What is hurting husband chart in BaZi

This configuration is present when the controlling element, indicating the partner/husband in female horoscopes, is attacked by the Output element, especially the Hurting Officer.

This configuration is examined in the BaZi classics. Some astrologers call it “woman countering husband” or “woman bringing bad luck to husband”. Jerry King is the astrologer who has treated this topic in his books in more detail than others.

In Four Pillars of Destiny, horoscopes are divided into different groups and categories. Before the astrologer reads a chart, he/she must determine which group and category it falls in. In addition, women’s horoscopes are read differently than men’s. There are different configurations that indicate that a woman will have problems in the subject of love and marriage. The expression of “problems” ranges from a lack of a boyfriend/partner/husband to a brief relationship or two for a the whole lifetime. It can indicate many relationships but also many separations/divorces, to love triangles and cheating. There are even extreme cases, where women’s partners play a weak role, get sick, have legal or financial troubles, or even die.

The hurting husband chart occurs in birth charts which belong to different groups, that is, the intensity of this configuration varies. It is important to note that women with such horoscopes, of course, do not want their partners to suffer or have a weak role. It happens because of the energy make up of their charts.

The Output element rules communication, expression, how one presents themselves and their skills, etc. Especially when it is unfavorable and highly prominent in the horoscope, it shows that the woman has excessively high standards and expectations of her partners. Another description of such a configuration is that the woman has too many goals and desires in her life and does not know in which direction to head.

I will illustrate the configuration of hurting husband/partner chart with Monica Lewinsky’s BaZi’s chart (a woman born on July 23, 1973 in the hour of the Horse). In the 1990s, this young White House intern became famous for her secret sexual relationship with the then US President Bill Clinton. These actions led to an unprecedented scandal in US presidential history, and Bill Clinton was almost impeached. 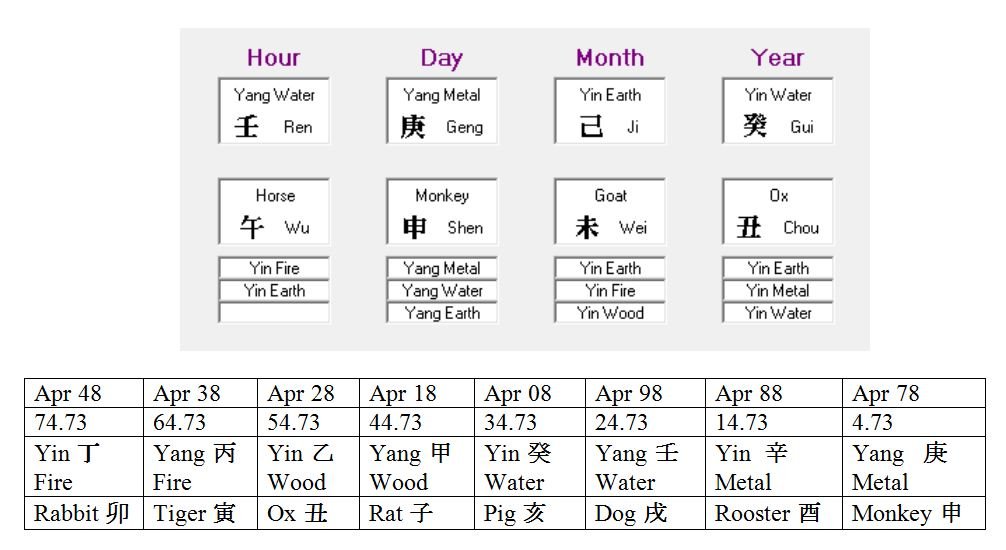 Monica Lewinsky’s horoscope belongs to the category of standard charts. She is a strong Yang Metal Day Master, that is, she has the so-called rivals chart. The favourable elements for her are Wealth and Power/Controlling one. The unfavourable ones are Resource/Seal and Companion/Self, while the Output one is not very favorable. That Lewinsky’ chart belongs to this structure is readily verifiable by the key events in her life and the years of their occurrence. I invite readers of my blog to check this out for themselves. As the subject of my article is not the timing of the BaZi chart but its structure, I will not be examining specific years since this will become a much longer article.

Fire controls Metal and shows Monica’s partners. Fire, however, is attacked by Water – the Output element that controls it. Lewinsky even has the Hurting Officer and the Food God/Eating God in the Heavenly stems. This is a classic case for a woman countering husband chart in BaZi. The only Wood (the Wealth element) that could bridge the Output and Power elements is hidden in the Goat, but it gets a clash from the Ox.

This is a negative indication not only for Monica’s love life but also for her (psychological) health. The reasons is the Resource element (which rules it), namely Earth, is quite strong and lacks the control of that Wood/Wealth. Lewinsky’s long depression and the weight problems of which she suffers is a well known fact. This is a natal indication, but it gets emphasized and worsened when Earth (the Resource element) is present in the Luck or Annual Pillars.

Combination of circumstances or fate

Now, some people would say that Monica Lewinsky is an opportunist who simply took advantage of her charm as well as Bill Clinton’s playboy nature. In other words, this was an isolated case which happened not so much because of the horoscopes of both but because of the fact that at that time the man in question occupied one of the most dominant positions in the world, with all the benefits that come from it. In principle, such a statement should not be dismissed outright. To be true, however, it would mean that neither Bill Clinton nor Monica Lewinsky has not had any problems in their love life until the affair in question. Or afterwards. The truth is that both of them have had problems in their love life before and after their relationship.

The answer to this question is easy when one has astrological knowledge. It lies in the natal promise of the people concerned. Monica Lewinsky had a relationship with a married man before the Clinton affair. Then she had a relationship with a Pentagon employee, even though that employee was seeing other women at the time, and Monica did not know about it. When she found out, Lewinsky decided to leave him, but she found out she was pregnant from him. She made an abortion later due to Bill Clinton.

In other words, because Monica Lewinsky has a woman-bringing-bad-luck-to-husband chart, the probability that her love life will bring her sadness and misery is enormous. Not only that, but it also hurts her partners, although her intention is not such.

There is a curious fact that most of you may not know. It has to do with Bill Clinton being charged and sued for sexual harassment by a US employee of the state of Arkansas, named Paula Jones (the state in which Clinton was governor). The incident happened on 8 May 1991, and the court case began in 1997, that is, before Monica Lewinsky’s trial.

Of course, the logical question arises why Paula Jones did not cause such damage to Clinton as Monica Lewinsky? The answer to this question is complex, because it concerns the fates of 3 people. Not only this, but it also has to do with the activation/timing of the birth promise of the respective horoscopes. In addition, it also has to do with the degree of eminence/rank of the BaZi charts in question.

Here is the Four Pillars of Destiny chart of Paula Jones without the Luck Pillars (a woman born on September 17, 1966, unknown hour of birth:

That all three Earthly branches consist of Peach Blossom stars immediately stands out, as the Rabbit is the personal such star for Paula and is located in the Spouse Palace. The Peach Blossom stars endow with charisma, being liked by the public, romantic attitudes, etc. The point is that if the stars consist of the unfavorable elements, one will have problems with their love life. Moreover, the Rooster clashes Rabbit, which hurts the love life of Paula Jones. The extent of this affliction depends on whether a useful or harmful element is involved. Eventually Paula Jones also experienced misfortune and suffered in her love life, as the drama and stress surrounding the Clinton case contributed to the divorce with her husband before the end of the court case.

The reason Monica Lewinsky caused such problems to Bill Clinton is not only because he was president at that time, but because her horoscope has the configuration of hurting husband/partner chart and that Lewinsky’s Four Pillars of Destiny chart is more eminent than that of Paula Jones.

I want to add that, as a result of all this stress, Monica Lewinsky suffered a lot. She even left her home country, the United States. 20 years after the scandal, she is yet to enjoy a lasting, happy love relationship (it is not even known whether she has even been in one for these 2 decades). Accordingly, Monica Lewinsky has not had any children.

Context of the woman countering husband configuration in BaZi

Some Asian women, upon finding out they have a hurting husband chart, choose not to get married at all. Again, the extent of this configuration varies in individual horoscopes. After all, there are over 1 million possible variations in the Four Pillars of Destiny.

I want to point out that Chinese culture is highly patriarchal/masculine. Chinese Astrology is the offspring of such a culture. My point is that it is stressed how the woman with a hurting husband chart indirectly hurts her husband/partner. However, it is not addressed how much the woman herself suffers from such a configuration, and that is very important. I know women having this configuration who, although they have had relationships (in some cases a large number), are unhappy. Some of them don’t even have children.

Does this mean that if you find out that you have a hurting husband/partner BaZi chart, your love life will be unhappy? Not at all costs! There are exceptions to the rules, but they are complex. They take the BaZi charts of both partners into account and are not the subject of this article.