In this article I explain how dividing the lifespan in Astrology is the same as in Chinese Face Reading. The human life can be divided in two or three parts. When does the second part of life start according to Ancient Astrology? When does the third part of life start? There are different techniques for this. Some pertain to the determination of the longevity in Ancient Astrology.

Knowing one’s true life Path, which is unique, as well understanding the roles of the Fates in one’s life and where (in what areas of life) and how one may exercise choices, instead of walking on the smoothest path, has been by far the most sought out Knowledge in the history of mankind.

Whether it is for power (emperors, popes), wealth (noblemen or business people), acquiring new territories (generals), or how to deal with the blows of the Fates (people with awareness), people have always wanted to have such information and how and when to act, so they get the maximum benefit.

Dividing the lifespan in Astrology and Chinese Face Reading, when elaborated, is quite advanced as it encapsulates a person’s whole life. In other words, there are different types of Fates, which are not always active or not with the same power or intensity. 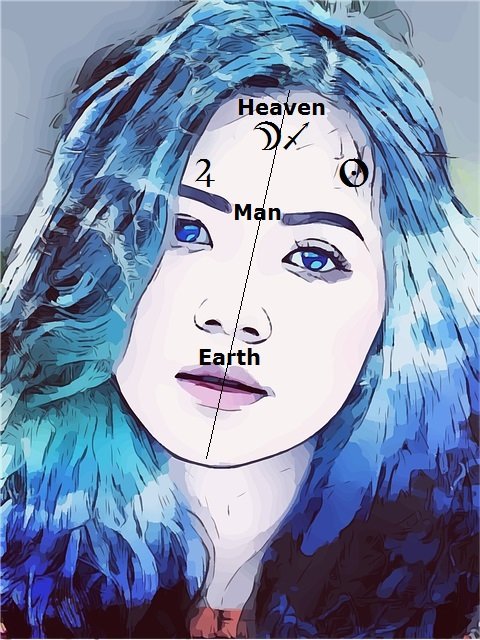 My usual thanks to the website and the creator for the free illustrations:

Again, this is my section on integrating these amazing systems of knowledge and I did not know that Chinese Face Reading does the same with life. And of course it has been doing it, just like Ancient Astrology, for at least 2000 years.

The question naturally arises how one is supposed to divide the life. There are two ways. One of ways of dividing the lifespan in Astrology is by the average longevity. For today’s Western world it is about 75 years. Thus when one divides the life by 2, the first half is 37.5 years and so is the second half. Obviously this method has serious problems because it applies and assumes general longevity.

What happens when someone lives 60 years or 50 or 40, or even less? Based on this wrongly assumed lifespan, lot of the predictions will be wrong. But more than that, this will start a chain reaction of mistakes. Why?  Because if the practitioner is a serious one, be it of Ancient Astrology or Chinese Metaphysics, once knowing the number they would start tying other techniques that involve the whole life, leading to certain conclusions. In other words, when the foundation is wrong, one’s can’t reliably build on. Yes, a lot of people live to 75 or more, but that is no excuse not to take the extra effort and learn how calculate the length of life. Of course, that is provided they, and the systems they use, are able to.

The second way is to calculate the actual length of life with Ancient Astrology on a case by case basis. Everyone has a unique Path, as I wrote, because their natal charts and faces are unique. No matter what the media or someone else is trying to convince the public, the reality is people are NOT born equal. Each has specific talents and predispositions, as shown by the natal chart.

On the bright side, reality is such that the Fates make sure change is constant. In other words, there is no guarantee that a wealthy man will remain so, and a poor one will remain so. Of course, life is not about wealth, and while someone may be granted a lot in certain areas, they will surely lack in others. After all, what is the point of being wealthy if one is sick or unhappy or has no real friends, but only people wanting to get their hands on their wealth and contacts? But I digress.

The point is that you see over and over in my articles, as well as written by every single textbook on for 1500+ years, that calculating the length of life is the most important and first thing to do in Ancient Astrology.

The situation with Chinese Face Reading, actually Chinese Physiognomy, and even Chinese Astrology, the Four Pillars of Destiny/BaZi branch is different. While there are many indications for general longevity, these systems are not structured in such a way so as to calculate the length of life.

Besides, the face changes, and while it is possible to predict when one will die with with Chinese Physiognomy, the practitioner has to be able to notice the changes in the face. This does NOT detract from their value because these systems compensate by showing information which is very hard to get by Ancient Astrology. In fact, in some cases I would even say it is most likely impossible to get.

On the other hand, Ancient Astrology has many systems of calculating how long one will live. However, it takes a long time to study those properly and deeply enough, to sift through the hints and scant explanations and exemplifications and determine which work reliably and on a consistent basis. That is why there are so few people in the world of Astrology, any Astrology (and I have already written elsewhere in my blog that Astrology is the only system of any type of knowledge on this planet that can reliably do this), who can actually calculate the length of a person’s life.

Dividing the lifespan in two parts in Ancient Astrology

As to the techniques of dividing life, in Ancient Astrology, particularly Hellenistic Astrology, the life is divided by 2. There are 2 major techniques and at least 2 others, which I will skip in this article.

Of the 2 major ones, one is specific, the other is general.

The trigon lords of the Sect Light

The specific one is called the trigon lords of the Sect Light. However, I don’t want to dishearten you, but you should know that since this also has to do with the length of life technique, there may be exceptions to this major technique.

There are 3 trigon lords:

There are certain rules how to time the handing over of the 1st trigon lord to the 2nd. I will not dwell on them here, but will say there is more to this technique that what is written in the ancient texts.

New Moon and Full Moon births, the lunar application and separation, the prenatal lunation and its lord

The second major technique, which as I said is general, involves whether one was born during a New Moon phase or a Full Moon phase. It also involves a as the Moon’s separations and applications. Some also include the ruler of the prenatal lunation and its zodiacal state to judge for the life.

Based on that and on the general support/eminence of the chart and of course the actual length of life, the astrologer judges accordingly. Again – in a general way. But when one adds the Moon’s separations and applications, in the proper context, it really becomes more concrete.

Medieval Astrology divides the life into 2 (New Moon vs Full Moon and Moon’s configurations) and 3 – the Trigon Lords of the Ascendant (as well as other places). There is a conceptual difference though.

The Sect Light shows the life of the native in a general, universal way. On the other hand, the Ascendant is the most personal point in the whole chart (along with the Lot of Fortune and also Spirit) and describes the body and the character of the native. These points and their lords also show what the person needs to be happy and find fulfilment, and in which area that will or won’t happen, in what way, etc.

Chinese Face Reading uses 2 major methods to divide the life. There may be others, but these are the most significant. One divides the life into 2 parts, the other into 3 parts.

The situation with these techniques gets further complicated due to their individual nature and philosophical foundations.

For instance, and I should stress that this is not written anywhere that I am aware of, it seems implicit that in the one that divides the life into 2 parts – the left side vs right side of the face, it is about the actual longevity divided by 2. And that is because of the way the technique is structured, as opposed to the one below.

Dividing the lifespan in three parts, namely Heaven, Man, and Earth based on the 100 positions map

The other technique divides the life by 3. I mean, Heaven, Man and Earth. This tecnique follows the 100 Positions Map of the face, where there is a point for every year of the native’s life from the moment they are born till their 100th year. And then it starts again.

I should say that, as usual, it is crucial whether the Spirit enters a male or a female body – males start the 100 Position Map on the left (Yang side of the face), females on the right (Yin side of the face).

Again, in this technique it seems implicit that life goes on. In other words, whenever/wherever one dies – as shown by the specific part of the face, (for instance dying at age 45 and 46 – the left and right cheeks for males and the reverse for females) – that is the end of it. Thus the native does not reach all the way down and then up to the whole face.

The importance of determining the eminence of the chart

In conclusion, and I keep repeating this, after the length of life is calculated, one must determine the eminence/rank of the chart. Why?

Because unless one does so, they can’t know the type of chart they are dealing with. While the techniques I presented this article are incredibly powerful, when examining the whole life of the native in a general and not so specific way, the practitioner will inevitably make some wrong judgements and predictions. This is sure to happen if the astrologer/reader follows them and disregards the general support and type of chart, also shown by other methods. This is because one native’s status in life may stay the same, or improve or decline or just slightly so. And unless the astrologer knows how to determine this, they cannot use techniques to their maximum potential.

If you are interested in learning more about eminence, Astrology and Chinese Face Reading, I suggest reading my other article.