Chinese Metaphysics, is as I have written here and here, arguably the most comprehensive System of Knowledge known to mankind. It can be accessed from any of its 5 branches. Chinese Metaphysics is so vast that one can easily get lost in the trees without seeing the forest. Yet it is the forest, the eagle view that one needs if they are to have any chance of get the most out of their Path.

In my latest article I examined the Holy/Cosmic Trinity of Chinese Metaphysics, namely Heaven, Man and Earth. Is there a hierarchy to these? Yes there is. Here is the representation again that I drew for my article: Chinese Metaphysics – the Cosmic Trinity of Heaven, Man, and Earth

This is a Taoist view, meaning it is ancient. As such it cannot be changed, no how matter inconvenient it is to some professionals in the field of Chinese Metaphysics. What I am getting at?

Well, some of these practitioners and their students say that each of Heaven, Man, and Earth gets 33% = they are equal in importance. To the best of my knowledge, this is nowhere stated in Classics. Moreover, it was the Chinese that said that a picture is worth a thousand words.

Well, looking at the picture (look up others on the internet and you will see the same thing, just represented differently), it is clear that Heaven comes first, then Man, then Earth Luck. I will not speculate as to any percentages. Knowing that  Heaven Luck cannot be changed and is on top, it won’t take much time to a critically thinking person to figure out that Heaven Luck’s influence is indeed stronger than the other 2 Lucks. In fact, one could go make the case that Heaven Luck is stronger than Man and Earth Luck put together.

Now, someone who feels threatened by this, because it “takes one’s free will”, “because it makes one a spectator of the games of the fates”, may say that I am exaggerating the role of Heaven. I suppose they might say that due to the fact that I specialize about all in Ancient and Chinese Astrology. As I have written many times, do not take my word for anything. Do your the research and you will see the veracity of my words. What I am saying is based not only on ancient sources, which I can always quote, but on my extensive practical experience.

Hierarchy of factors in Chinese Metaphysics

Here is what I mean. There is a very famous hierarchy in Chinese Metaphysics. I will be quoting from Ani Pesheva’s Bulgarian book: Китайска Астрология част 1: Звездите в Четирите Стълба на Съдбата, p.205-206 (Chinese Astrology Part 1: The Stars in the Four Pillars of Destiny). Translation by me: 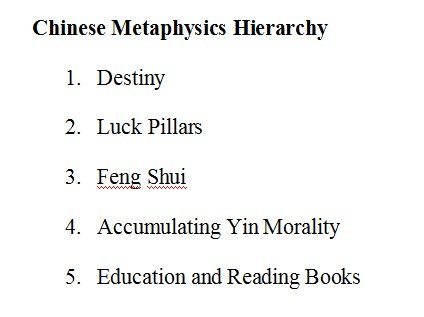 Go to 0 minutes and 49 seconds to see a more detailed list of the hierarchy. I recommend the lecture, but keep in mind that the lecturer is coming from a modern Chinese Metaphysics background. For easy reference, I have made a screenshot and reproduced it here:

The point to note is that the factors are ranked in a hierarchy. Ani Pesheva (who lived in China for 7 years and knows ancient Chinese) even translates as: “first is Fate”, second is Good Luck and Luck Pillars…. In other words, there is an unambiguous hierarchy here.

Which the “Fate” and “Good Luck” factors are

So which disciplines study fate and what is fate represented by? The answer is Astrology/BaZi, Zi Wei Dou Shu, He Liu Lou Shu, etc. Fate is represented by Heaven.

What is Good Luck? It cannot mean just pure random luck, because this is not how the Chinese view luck. Besides, if it is random, the astrologer cannot grade it and predict it, so how can one know that it comes second in importance?

My understanding is that Good Luck here means being in the right place, at the right time, doing the right thing, (doing it with the right people). This opens the door to the Divination branch, namely Da Liu Ren, Qi Men Dun Jia, I Ching/Yi Jing and many others.

What are Luck Pillars? Luck Pillars are the predictive/timing techniques aka Rulers of the Times/Chronocrators in Ancient Western Astrology.

As you see yourselves, Heaven undoubtedly comes first in influence. Regardless of whether my understanding of Luck is correct or not, Man Luck comes second via the Luck Pillars (again represented by Heaven, but the way they approached is also somewhat dependent on Man Luck). This is followed by Feng Shui – Earth Luck.

Again, this was written thousands of years ago. Like the fundamental rules of Ancient Astrology and Chinese Metaphysics, it is based on Eternal Truths and cannot be changed by anyone.

The factor “Accumulation of Yin Morality”

You will have noticed that what Ani Pesheva translated as the Accumulation of Yin Morality, the lecturer (don’t know whether it is his translation) has it as “Karma/ Accumulate Good Deeds”. There is a big difference, is it not there?!

Ani Pesheva quotes an ancient source saying that Yin Morality is “when you do good deeds without the others noticing”. If you were wondering, yes, Yang Morality is the explicit doing of good deeds. Sound familiar? Western civilization is obsessed with one’s reputation. Hence when someone does good deeds, they want everyone to know about it. They call the media, organize meetings, etc. This type of charity is Yang charity/Yang good deeds. Please understand: I am not criticizing these benefactors, they are influenced by their culture and they are doing good deeds even with the Yang approach.

I will not be examining the other factors from this hierarchy list save clarifying that Name means the auspiciousness of one’s name, which is related to Numerology in the West. Also, Physiognomy means reading one’s fate from their whole body, not just their face. Note also that Self Cultivation (Self-Development in modern parlance) takes 10th place. Again, this flies in the face of modern spiritual movements, such as New Age and their false beliefs of creating one’s reality.

How to get the most out of your path

Notice that I did not us the word Fate or Destiny. Why? Because even with being a Destiny reader, just as Ancient Western Astrology and Chinese Metaphysics teach, the fated existence is one part of the full picture. As such, Destiny disciplines such as Four Pillars of Destiny, ZWDS, HLLS, etc have their limitations. In short, I understand one’ Path as the totality of Heaven, Man and Earth, with the emphasis on Man.

This also brings up the question whether one could know their Path without resorting to Destiny reading/Astrology. The answer is Yes and No. Yes, when one engages in Self-Cultivation and receives intuitive insights. No, because even with all the specificity, one’s whole life cannot be covered in few significant insights. There are just too many other external factors that are part of one’s Path.

So how do your maximize your Path?

And so on with the hierarchy. I want to make it clear that this is not a competition. In other words, I strongly suggest that you do not go about doing this by focusing exclusively on the most important ones and ignoring the others. After all, one of the primary principles of Chinese Metaphysics is the striving for balance in all of one’s existence.

Lastly, but perhaps most importantly, I want to emphasize the role of Man Luck. Even after understanding your fate, as shown by your horoscope/Four Pillars of Destiny chart, if you do not take advantage of it during the Luck Pillars (through the concept of Luck by doing the right thing, at the right time, in the right place with the right people) but merely wait for Fortune to land in your lap, you will have wasted invaluable time, which you have no way of getting back.

To use the analogy of the previous article: having a superior vehicle (horoscope) will not necessarily lead to greater success if the driver (Man Luck, your actions, knowledge, value system, choices) manages it poorly and drives it on a road full of obstacles (Earth Luck).