I discuss the Astrology of animals in this article. I have been taking long walks with a friend of mine, who has a horse and a dog, and I also met some pet owners and heard their stories.

In my previous article, I discussed the Astrology of non-humans, as described by the ancient authors.

My friend has a surface interest in Astrology and he was finally able to get the time of birth of his horse. He gave me the data and started asking me questions. And here is where it gets interesting.

How many of all the astrological techniques can be applied directly to animals? In other words, they would require no modification and one would apply them as if the nativity were of a human. 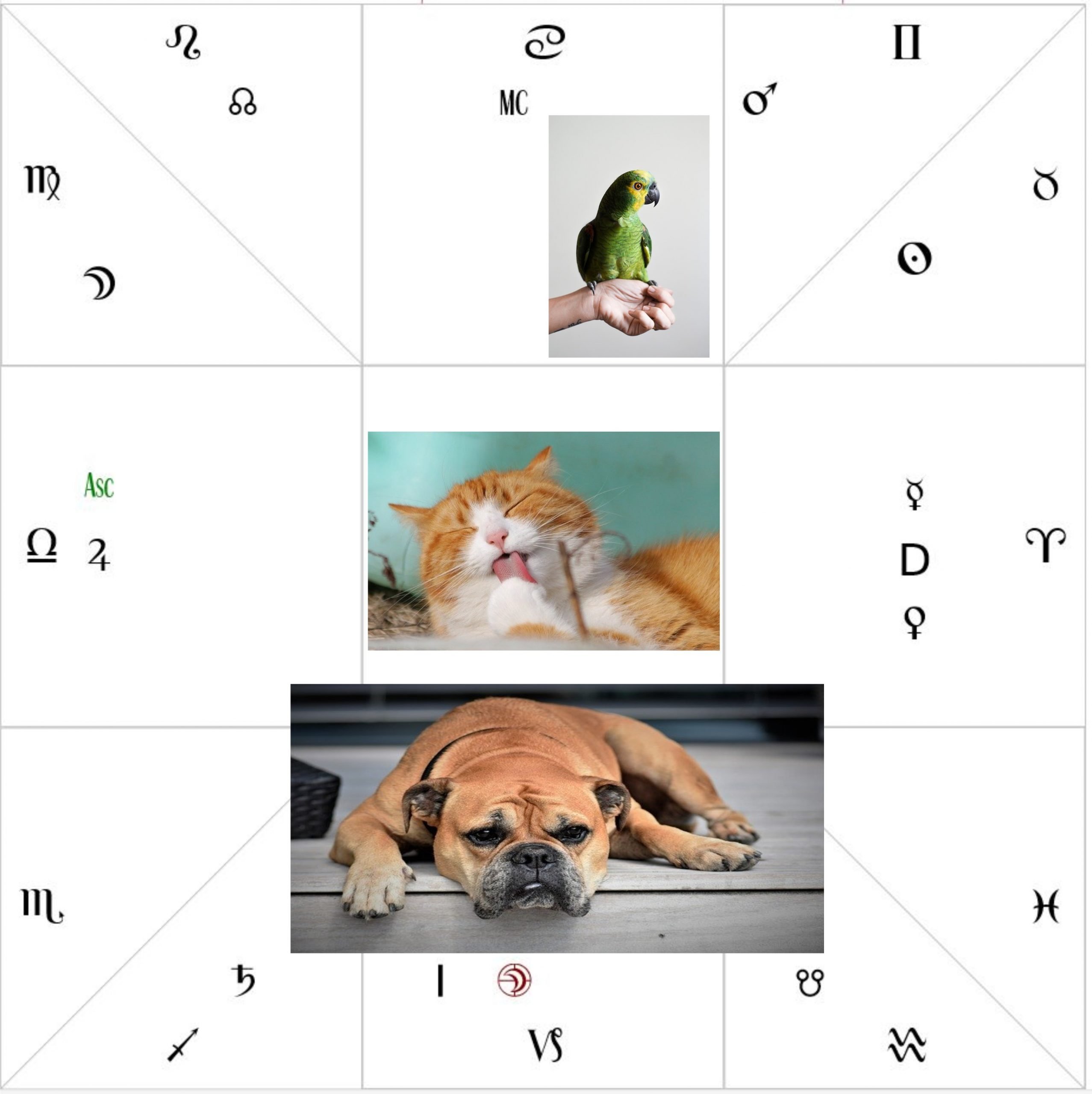 My usual thanks the website as well the authors for the free pictures:

For example, I could immediately see, by using the trigon lords of the Sect Light, that the first half of the life of the horse is awful and dangerous. On the other hand, the second part will be far better and will be peaceful.

My friend told me that the first owners of the horse beat it, so they can “break” its character and it would obey their commands. The treatment was horrible and it left scars (not just psychological ones).

Ever since my friend bought this male horse, it has had a very healthy life, full of care and peace. In fact, my friend and his horse work with handicapped children, something which did not happen during the first part of the life of the horse.

My friend kept asking about the character of his horse, his illnesses and susceptible parts of the body, etc.

My friend takes part in amateur horse riding competitions and he asked me about the peaks in the life of the horse. Here comes the (first) problem. If I were to use Zodiacal Releasing from Spirit or from Fortune, as explicated by Valens, as I intended to, among other methods, I can’t use the technique with the same ratio. In other words, horses do not live as long as we humans. I can’t wait for a major period that can last 15-19-25-30 years because horses generally live anywhere between 25 to about 45 years.

So what does one do?

Well, the astrologer encounters the same problem with the calculation of the length of life. My friend has the time of birth of his horse. I have its natal chart and wanted to generally at least see how long it will live. The point is, I would not go into my full methodology for calculating the longevity with Ancient Astrology before knowing which parts of it I may apply without modification and which ones will need to be modified. This is because calculating the length of life with Astrology, a service which I offer, is extremely difficult and time consuming. As such, it is pointless to spend weeks without knowing how exactly to modify these techniques, due to the fact that I am dealing with a horse’s horoscope

Again, what does one do?

Well, the BaZi/Four Pillars of Destiny branch of Chinese Astrology, in which I am well-versed in, has a way of dealing with this. I have seen this in cases of dogs and cats. What is done there is to determine not the longevity ratio but the gestation ratio of the given animal in question compared to the human.

In other words, the Luck Pillars/Dashas/Rulers of the Times in a cat’s nativity will be 4.285 times shorter than those in humans. Thus the BaZi astrologer divides each technique into 4.285 and proceeds accordingly to apply in the cat’s natal chart, of course judging it in terms of a cat’s life.

I wonder, however, whether the longevity ratio is not more suited to this than the gestation one. I mean, horses, dolphins, etc live at least 2 or more times shorter, and their gestation period is longer.

I admit that I don’t have experience in these, and should I decide to delve deeper, I will need a lot of charts of animals to determine which the correct ratio is.

As far as the dogs are concerned, I will quickly tell 3 stories of different breeds of dogs, with different owners. All of these stories really happened.

Does the astrologer examine the chart of the dog or the chart its owner?

So how does one figure these stories out astrologically? Would one need to look into the natal charts of the dogs themselves, or into the chart of their owners?

Why did case 1 and 2 ultimately end well, given what might have happened, and why did case 3 suffer so much? I mean, the native in case 3 will probably initiate legal action, which will take time, and energy/nerves and resources, etc. Even if his dog’s leg recovers physically, the trauma will still be there psychologically.

Again, why did these stories develop this way?

What if the native in case 1 had bought real (dark) chocolate and his dog had eaten them? The chances it would have died are enormous, especially as it ate a few chocolates.

What if the native in case 2 was not able to find his dog?

Likewise, what if the native in case 3 had passed on the same street 5 minutes later, thus missing the drunk or homeless man and the big dog following him?

Conclusion on the Astrology of animals

Again, doing 100 percent Astrology, I cannot help but show some interest in the Astrology of animals. Unfortunately I don’t have the charts of the dog owners, nor of the dogs themselves.

The Astrology of animals and the stories I shared have been refreshing for me by temporarily diverting my intense focus of writing my astrological courses and tutorials.