The purpose of this article is to explain the concept of a day or night chart and why it is so important in Ancient Astrology. I give the horoscope of Steffi Graf and Arnold Schwarzenegger as examples.

The concept of sect or party in Astrology

This concept comes from Ancient Astrology (from the ancient Greek word “hairesis”). One of the reasons I am writing this article is that very recently Levente Laszlo of The HOROI Project translated some fundamental ancient astrological texts. In them he translates this concept not as “sect” but as “party.” Robert Schmidt of Project Hindsight translated it as “sect,” but he also explained that it meant “division,” “party,” and so on. As Levente explains, it is more appropriate to call it “party.” Thus, the planets in each horoscope are composed of two parties: day and night. Accordingly, in each horoscope there is a party that rules and a party that is in opposition. Sounds a little familiar, doesn’t it? This brings me to the concept in this article.

The concept of a day or night chart in Astrology

Whether it is called that way, or a day or night birth, or a diurnal or nocturnal chart, it is the same thing. Namely, that all horoscopes are divided into two types. What determines whether a chart is diurnal or nocturnal? Of course, the Sun does this. The concept of Light and Darkness is the most original of all. Naturally, it is present in all religions as well. 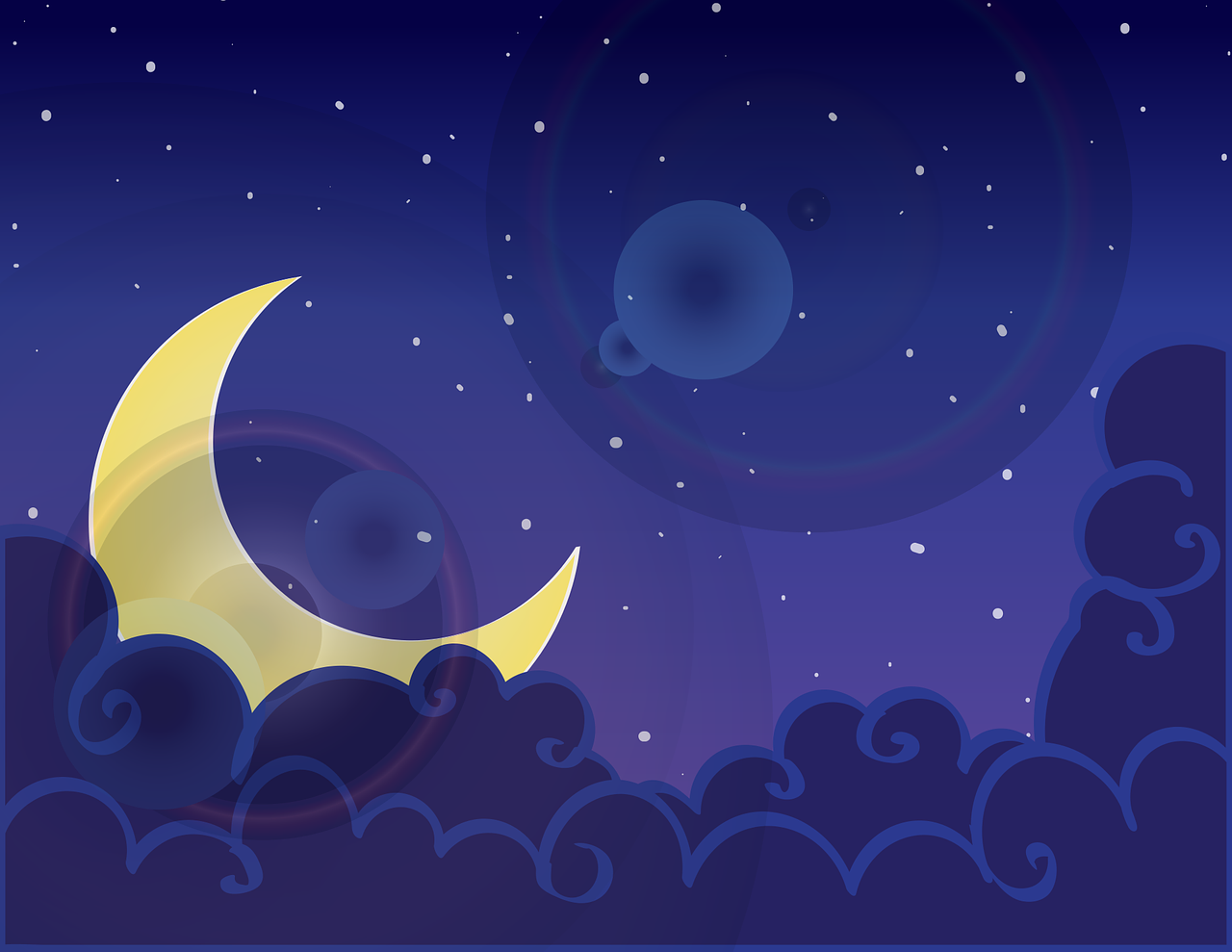 An example of a diurnal chart: 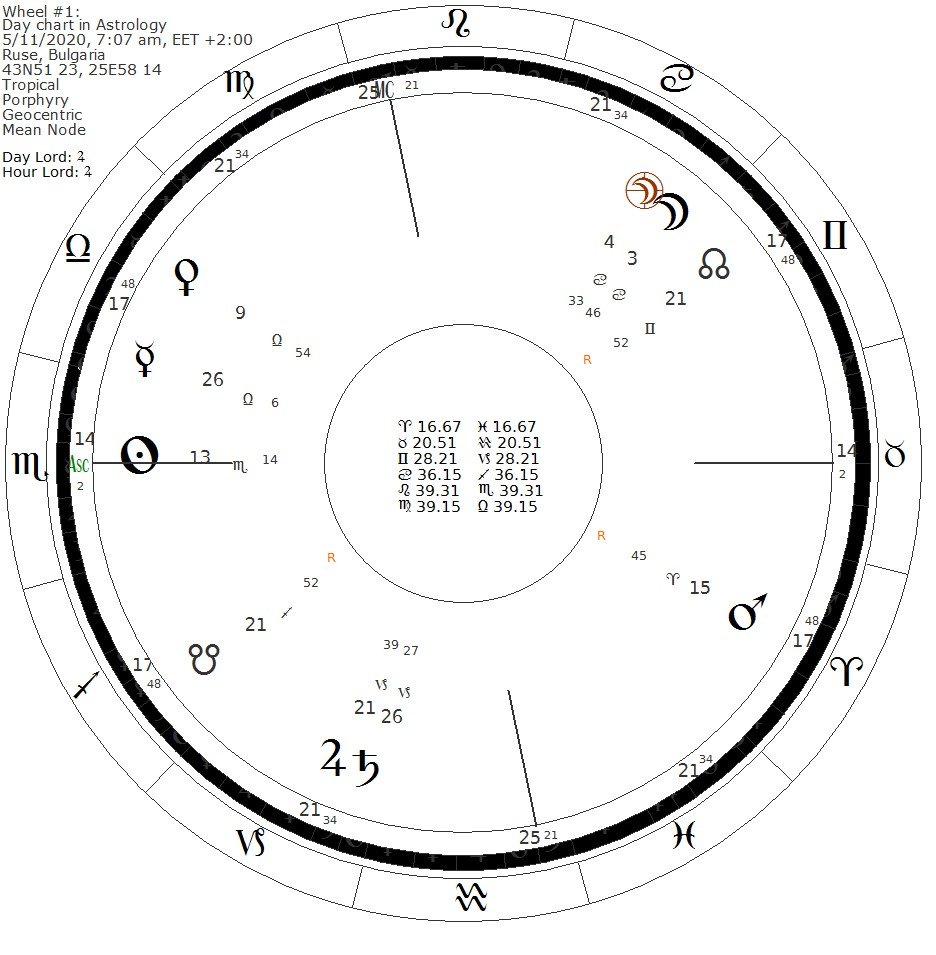 As can be seen, the Ascendant/the intersection of the ecliptic and the eastern horizon is at 14.02 Scorpio. The Sun is conjunct the Ascendant, but has already risen at 13.14 Scorpio and the primary motion of the celestial sphere continues to rise up to the 12th quadrant house. According to the whole sign houses system, it would be in the 1st house even if it is at 0 Scorpio, because the Ascendant image/zoidion is Scorpio.

An example of a night birth with the data from the same day – November 5, 2020 in Ruse, Bulgaria: 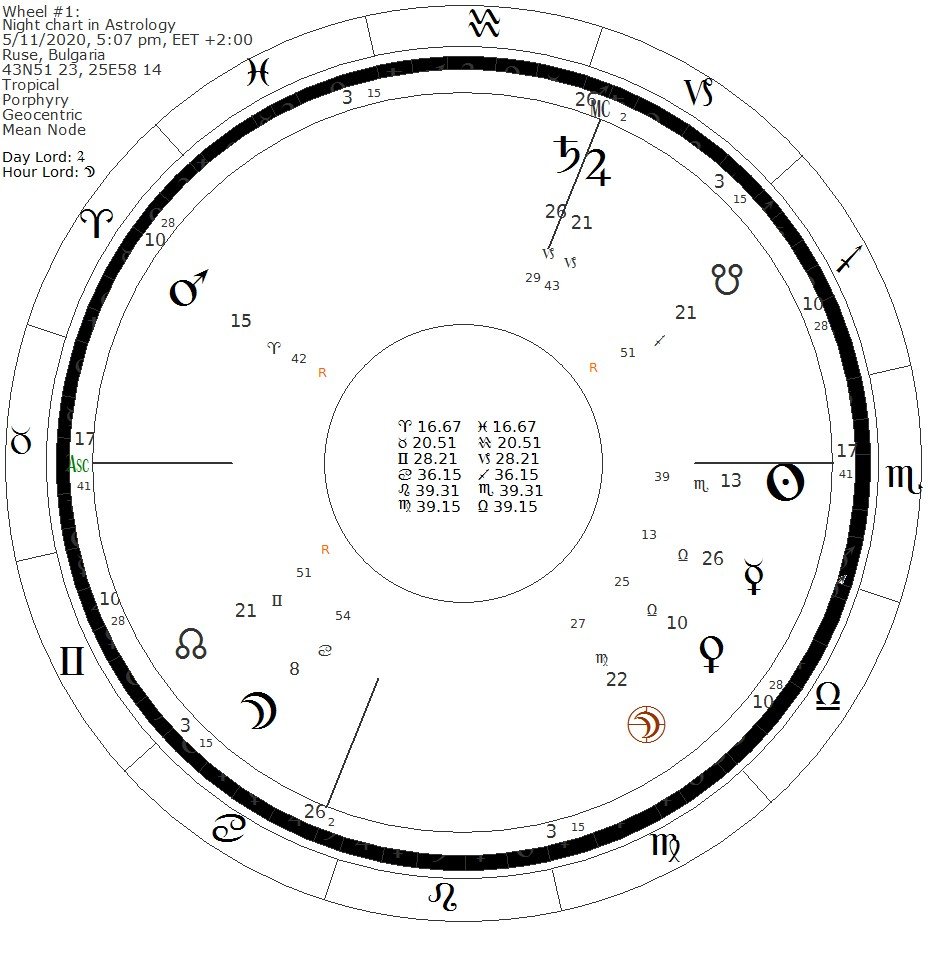 That is, the difference lies in whether one follows the symbolic-astrological language (school 1) or the astronomical one (school 2).

Some astrologers belonging to school 2 claim that the chart is diurnal while one can read a newspaper outside.

This difference is important to resolve, especially by practicing astrologers, not by those who give theoretical lectures, articles, or write books. You will not find it in ancient books. The problem is that it is difficult to find many horoscopes that are on the verge of the line of the Ascedant and Descendant. As I have written, I have had similar cases with close time of birth in which the Sun is close to the horizon, which I have had to rectify to determine whether the person’s horoscope is diurnal or nocturnal.

A table with day and night planets and their rejoicing conditions 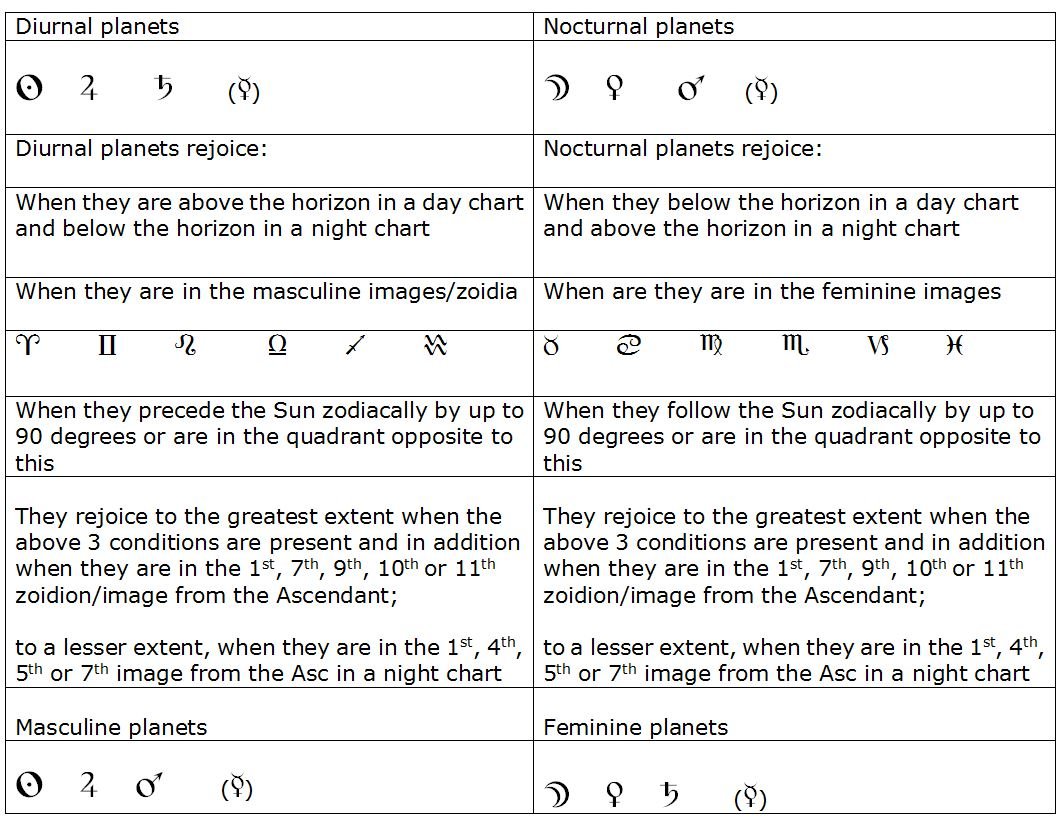 The masculine planets are the Sun, Jupiter, and Mars. The feminine planets are the Moon, Venus, Saturn. Mercury varies again. I must say that most authors give Saturn as a male planet, but one of the earliest and most influential authors – Dorotheus of ​​Sidon, from the 1st century AD, gives Saturn as a feminine planet. Saturn rules darkness, death, slowness, which are female /Yin characteristics, not male/Yang ones.

Whether you were born under the rulership of the day party or the night party has a huge impact in the reading of your chart. For example, it is widely believed that the Sun is the most important planet in Western Astrology, while the Moon is such in Indian Astrology. This is not true about Western Astrology, but let me not deviate from the current topic. The point is that for people born at night, the Moon is more important than the Sun.

This is the second reason for writing this article, namely that in my astrological consultations people sometimes wonder why I do not talk so much about the Sun in their horoscope, but pay more attention to the Moon. This is because they were born at night. Another reason is that if a planet, in this case the Sun and Moon, does not rule your Ascendant, is not in it or aspects it, it is not your significator and does not describe you except in a general way.

Also, the length of life in Ancient Astrology is calculated differently, depending on whether the chart is diurnal or nocturnal. The same goes for the eminence of the horoscope. It also applies to the native’s profession and spirituality. In addition, certain configurations are much more powerful for a day chart, or vice versa. The same applies to the Moon, and it must also be taken into account whether she is waxing or waning.

Steffi Graf’s horoscope – an example of a diurnal chart 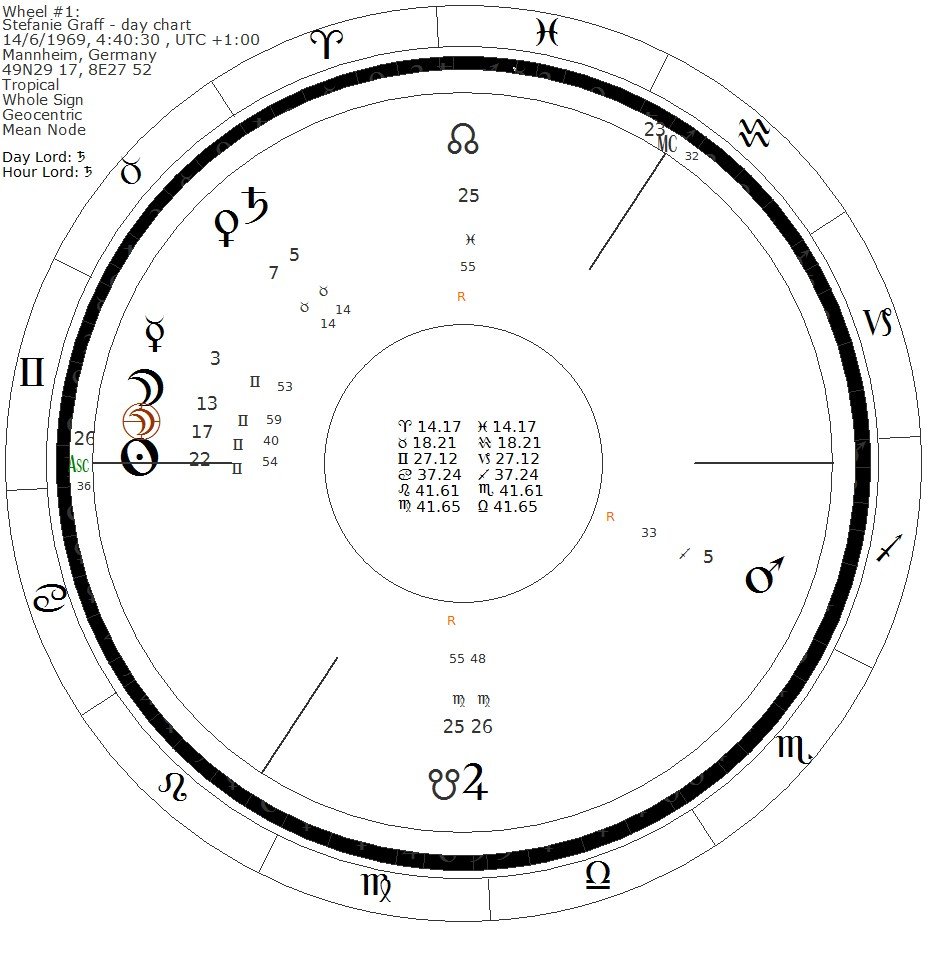 Stefanie Graf, known as Steffi Graf, is a former German tennis player who is widely considered the greatest in the history of the singles game (along with Margaret Court).

As can be seen, the Sun is above the line of the Ascendant and accordingly the chart is diurnal. However, it can be seen that Mars is in the 7th zoidion from the Ascendant, namely Sagittarius, although Mars is below the western horizon, that is, it is in the 6th quadrant house. Mars scrutinizes (an applying aspect within 3 degrees) Mercury with opposition, with Mercury rules the 4th image from the Ascendant, representing the parents. Moreover, Mars regards (configuration by zoidion) the Sun by opposition, and the Sun rules the IC, which falls in the 3rd place from the Ascendant. In addition, the Sun is the universal significator of the father. That is, we have a triple indication that the native’s father will suffer harm.

Although Steffi Graf is a multimillionaire, loved and respected all over the world, an icon of millions and so on, her father got into legal trouble first in 1990 and then was sentenced to imprisonment in January 1997. Such a harsh punishment is extremely rare in the horoscopes of famous athletes, but in this horoscope the harm is present and cannot help but give a serious effect.

Arnold Schwarzenegger’s horoscope – an example of a nocturnal chart 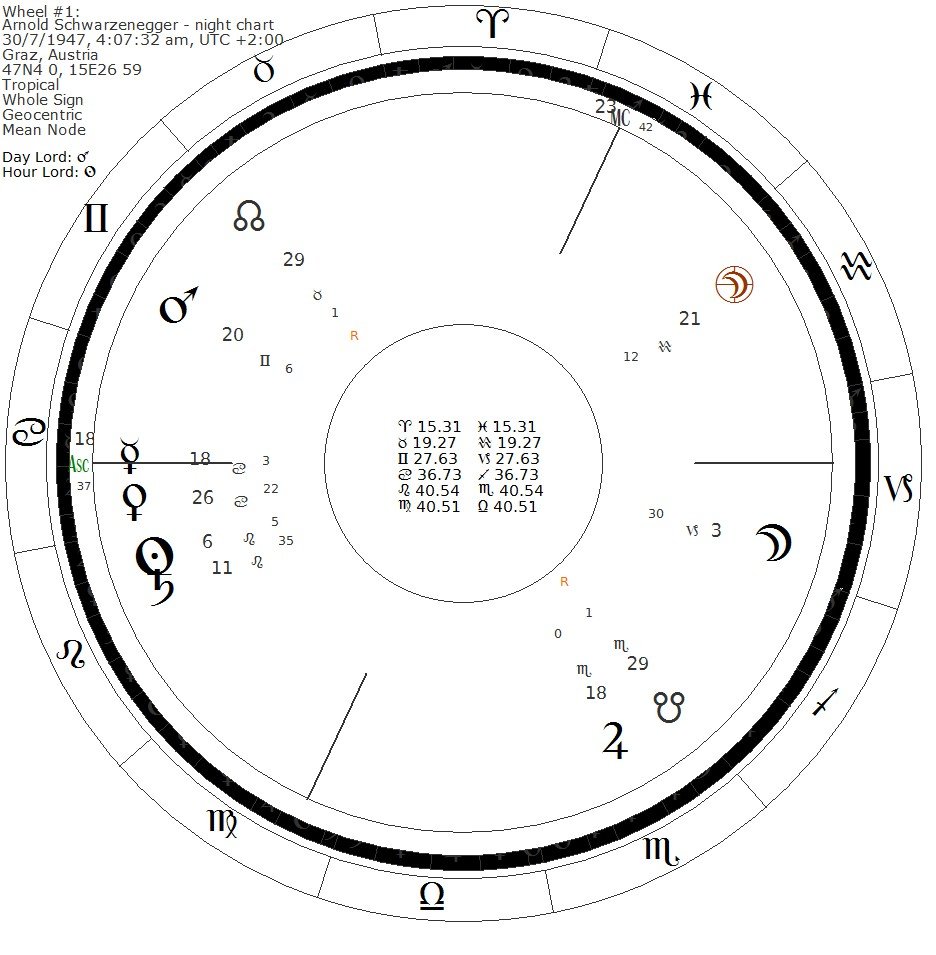 There is hardly any need for introduction, but Arnold Schwarzenegger is a world-famous bodybuilder, actor, former politician and so on. As you can see, the Sun is below the horizon, being in Leo – the 2nd image from the Cancer Ascendant.

Because the chart is nocturnal, Saturn becomes the most difficult planet. Fortunately for Arnold, Saturn is not in a pivotal image, otherwise the problems indicated by this planet would have been more serious. Still, Saturn is pivotal relative to the Lot of Fortune, which is the second Ascendant in Ancient Astrology.

As for the effects of Saturn, the Sun is the universal significator of the father and rules the heart, spine and right eye (left eye in a woman’s chart). Arnie’s father died at the age of 65 from a stroke. Some astrologers say that in addition to Mercury, the Sun rules the brain. Others say this because of the Sun’s the co-rulership of Aries, the image representing the head. Otherwise, Arnold Schwarzenegger himself has had serious heart problems. He was born with a problematic aortic valve and has had at least two heart surgeries. This indication is derived not only from the universal rulership of the Sun over the heart and being afflicted by Saturn, but also from the fact that the lord of the Lot of Fortune, Saturn, is in Leo, the image/zoidion ruling the heart.

Conclusion on day or night chart

Whether we have a day or night chart in front of us is one of the first things we check as practitioners Ancient Astrology. I think you now understand why. Unfortunately, the concept of the day and night party did not fully survive in Perso-Arabic Astrology, from which European Astrology emerged at the beginning of the second millennium. Accordingly, since it did not survive even to such an extent in European Medieval Astrology, the concept of sect did not reach modern astrology at all.

For those who are wondering if the concept of a day and night chart is relevant in Chinese Astrology, the answer is a resounding yes. However, it does not apply to such an extent and is not applicable to all Chinese horoscopes.

My usual thanks to this site and the author of the picture in question: