The purpose of this article is to explain what a Peach Blossom chart is in Chinese Astrology, as well as to illustrate this configuration with real people’s charts.

What is a Peach Blossom chart in Chinese Astrology

This is a configuration in BaZi in which at least 3 of the four pillars (the year, month, day or hour) contain the cardinal Earthly Branches/Chinese zoidia namely the:

These 4 Earthly Branches are called cardinal because they contain the purest energy of the corresponding element:

The Rat is pure Water

The Rabbit is a pure Wood

The Horse is Fire and Earth

The Rooster is pure Metal

Another reason to call them cardinal is that they occupy the four main directions of the compass:

The Rat is North

The Rabbit is East

The Horse is South

The Rooster is West

As I have written before, in the BaZi branch of Chinese Astrology, the individual charts are assigned to separate categories with separate names. There are over 20 categories. Of the translated Chinese sources I have read and studied, I have not come across one with this name (although there is a category with 2 Horses and 1 Rat or 2 Rats and 1 Horse).

In other words, it is not that likely that you will find a chart called with this name by another astrologer who practises Classical BaZi.

Why I call this configuration this way

These 4 Branches (the Rat, Rabbit, Horse and Rooster) are called this way because they represent the star with this name. The Peach Blossom star is one of the most famous stars in Chinese Astrology. It endows those who have it with charisma, sex appeal, gift of the gab, romantic nature, people who love poetry, music, painting, romantic walks and more. If it is afflicted, if it is a harmful element or if it is located in the external side of the horoscope, a person tends to be easily tempted and goes out a lot, and so on.

The reason I am sharing this article is my experience with similar BaZi charts. I have noticed that a large number of people who have a Peach Blossom horoscope are very successful professionally and / or very wealthy. Besides, I have not read any other astrologer who made such an observation. In addition, some of the people who have this configuration have several marriages (after all, the branches are Peach Blossom ones).

I also want to point out that I don’t know the time of birth of some of these people. However, the configuration is present because the year, month and day are composed only of the cardinal Earthly Branches in question:

This is the Four Pillars of Destiny chart of Brad Pitt – a world-famous actor, multimillionaire, winner of some of the most prestigious awards, one of the sexiest men and more. As can be seen, 3 of the four pillars contain cardinal Earthly Branches.

Above is the Four Pillars of Destiny chart of Natalie Portman – also a world-famous actress, multimillionaire, she has won and been nominated for some of the most prestigious awards in cinema. She has also regularly been in the charts for the most beautiful or sexy women. Her time of birth is unknown, but 3 of the four pillars are also occupied by cardinal Earthly Branches.

Beyonce is a world famous singer, performer, etc. Again, she is a multimillionaire, she has won and been nominated for some of the most prestigious awards in music and so on.

Note: Beyonce was born in the Grey area, but her correct Four Pillars of Destiny chart is exactly the one above – which is according to the lunar calendar. In my article “What is Chinese Astrology” I have given links for free calculators so that everyone can calculate their own BaZi chart with both the solar and lunar calendar and note if there is a difference. If there is, then you were born in the Grey area.

Notice that her horoscope is made up of 3 Roosters. Beyonce’s time of birth is not so reliable and that’s why I didn’t use it. Otherwise, according to the information given, her Hour Pillar would be the Yang Metal Dragon.

The above is the BaZi chart of Ivan Lendl, one of the greatest tennis players of all time. He also started from scratch. He is from former Czechoslovakia and moved to the USA. The American mainstream media were openly against Lendl, did not portray him in a fair way, and tried to get the American public against him as well, even though he was trying to became an American citizen.

Some say this is due to the fact that Ivan came from Eastern Europe during the “Cold war”. Others say he was too much of a threat to American tennis players Jimmy Connors and John Mcenroe. Whatever the cause, and despite that, Lendl became the most dominant player in the world in the second part of the 1980s and holds records that are unlikely to be broken.

Ivan Lendl was somewhat unfortunate to be part of the era of some of the most talented players in history. Otherwise he would won many more Grand Slams. Lendl would have also likely won Wimbledon, the only Grand Slam he did not manage to win, but his generation consisted of very strong players on grass (Mcenroe, Cash, Edberg, Becker, etc). Needless to say, the grass of then has nothing to do with today’s grass. Like most players, Lendl had to serve and volley on both first and second serve.

Contrary to what people are led to believe, Lendl possesses a good sense of humour, is very sincere and is considered the father of modern tennis. For a comparison between Lendl’s and Connors’ character, I recommend you read what American tennis player Pete Sampras says about them in his own autobiography. Ivan Lendl’s chart also has 3 of the cardinal Branches.

Peach Blossom charts of people who are not world famous

In order that some not say that I am cherry picking world-famous people, after I have discovered that this configuration is present in their natal charts, I will give 4 examples that are not world-famous. The people in question are not so much in the spotlight, as some of them are not at all.

I will be very brief and protect the identities of these people. 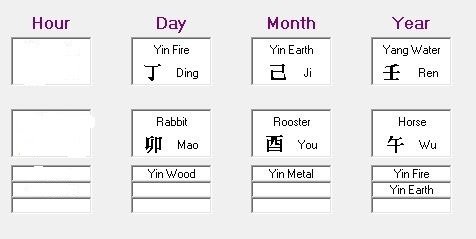 A man who started from scratch, who took a lot of risks, proved himself beyond a doubt and succeeded abroad, becoming a multimillionaire. Has owned a variety of businesses, is a great bohemian. Here we have 3 of the 4 cardinal Branches.

A man who always works in managerial positions, with an above the average standard of living. He is a big bohemian, romantic and a womanizer (The Rabbit is the Peach Blossom star in his chart and is in the external side the horoscope). Here we have 4 of the 4 cardinal Branches.

An ambitious man who started from scratch, met influential people, risked a lot and made a breakthrough. He owns several businesses and is a workaholic. Here we also have 4 of the 4 cardinal Branches.

Example 8 – a native who works at a rarer position

I was recently given this chart. I had been planning to write this article for a while, and when I saw this horoscope, I was reminded that the time had come to do so.

This native has an above average standard of living, started from scratch and works at a rarer position. I will only say that this person works with tremendous sums of money and assets. Again, we have 3 of the 4 cardinal Branches.

Conclusion on the Peach Blossom chart in Chinese Astrology

It is important to keep in mind that this is only one configuration. There are many configurations in Chinese Astrology. You need to read the whole chart, determine its structure and so on. In other words, you cannot count on the fact that when you notice this configuration that the person with this chart will by all means be successful professionally or very rich.

Brad Pitt’s chart is a Dominant self (special category). Those of Natalie Portman and Beyonce are other types of charts, but they also fall in a special category. Some of these charts also contain configurations for eminence, they have combinations between the Heavenly Stems, etc.

Several Chinese emperors also have a Peach Blossom chart and are known to have been great romantics, calligraphers, lovers of poetry, and so on.

To be thorough, I have seen Peach Blossom charts in alcoholics or people who have been sexually abused. This is especially true when we have a clash + destruction or a clash + punishment between the Earthly branches.

Having said that, the point is that it is recommended to get in the habit of noticing a Peach Blossom chart when you come across one, because it is not encountered so often and its results stand out too often.