This is my tribute to astrologer Robert Zoller who I found out today from the Skyscript Forum that he had died on the 24th of January 2020. What follows is my expressing my deepest gratitude to this great man.

Who was Robert Zoller

Robert Zoller was not just a superb astrologer. He was also an alchemist and had a serious interest in astrological Magic/Picatrix. He was also a translator and an occultist. He did not have children. He devoted his whole life to spiritual knowledge and self-cultivation.

The Western world has largely Robert Zoller to thank for the restoration of Medieval Astrology. Needless to say, I am well familiar with the enormous contribution of Olivia Barclay in the United Kingdom, and with Robert Hand and Robert Schmidt’s crucial role for the founding of Project Hindsight in the USA along with Zoller. The focus of this article though is my tribute to astrologer Robert Zoller. 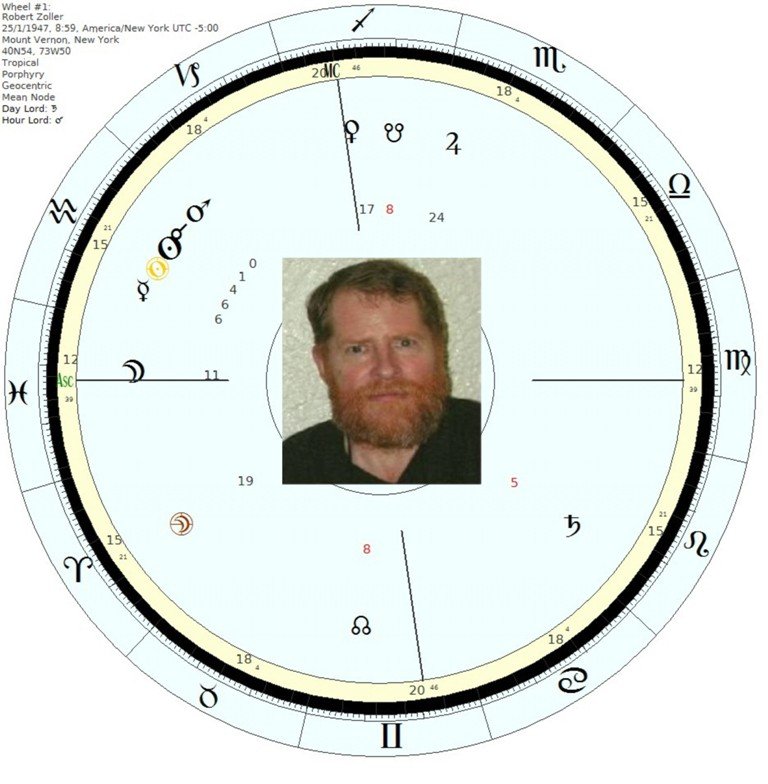 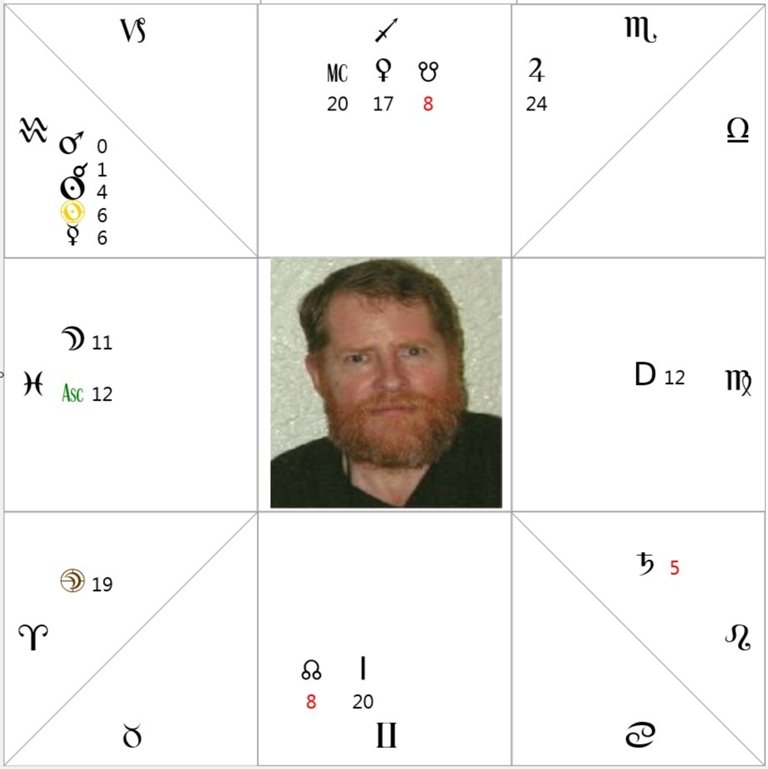 Robert Zoller, also thanks to the influence his teacher Zoltan Mason, started translating ancient texts in the 1970s and later presenting Medieval Astrology to the astrological community. He was a pioneer. I rank Robert Zoller’s contribution as high as Fiodor Gruzinev’s in the East, who, back in the 1960s, helped restore both Ancient Astrology and the Jaimini branch of Indian Astrology. In fact, Robert Zoller’s influence is greater than Gruzinev’s.

Robert Zoller made stunningly accurate predictions, both natal and mundane

Bob repeatedly made stunning predictions, including mundane ones, such as the ones about the attacks on 11th of September 2001 and that George Bush jr would become president.

Some of Robert Zoller’s students

In addition, he taught and influenced many students and astrologers, some of which have continued his work of restoring the totality of Ancient Astrology. One of them is Benjamin Dykes; another is Regulus Astrology; another is Steven Birchfield; another is myself, Zagata. There are many others.

Tribute to astrologer Robert Zoller for teaching Astrology without Uranus, Neptune, Pluto, and all the other modern innovations

Zoller was adamant that the trans-Saturnian planets have no place in Ancient Astrology. I feel very fortunate that, through synchronicity, I found about Zoller’s courses comparatively early. I mean, about 1 year after I had begun to study modern Astrology and had spent quite an amount of money with little success. I had to unlearn a lot of materials, not just astrological ones but philosophical and esoteric ones, or I should perhaps say pseudo-astrological, pseudo-philosophical, and esoteric ones.

I easily got cured of the obsession of starting to read the chart by examining Uranus, Neptune and Pluto, and the myriads of aspects. In fact, as I progressed further, it was very obvious that Ancient Astrology is a perfect system.

Just as Robert Schmidt, (who also recently died, unfortunately) who insisted that the ancient philosophical and astrological texts should be studied on their own terms, so did Robert Zoller.

As Robert Zoller stated, if one has taken it upon themselves to study the traditional path, they owe it to themselves to study it and to practise it the way it was practised for 2,000 years. Then, after they have mastered the ancient astrological system to the extent that they can, then, if they so decide, they can choose what to use and whatnot.

I stopped using the modern planets, asteroids, and modern aspects right away. As a result, my skills have not only consistently improved over the years, but so has the clarity with which I view an astrological chart. I am incredibly grateful to Zoller for this.

As far I know, the majority of Robert Zoller’s students also stopped using Uranus, Neptune, Pluto, the asteroids and minor aspects. Moreover, today, thanks to the many translations of Ben Dykes, James Holden, and Robert Schmidt, we know much more about what constituted the ancient astrological system than Zoller taught 15-20 years ago. This means that today it is even more impossible to incorporate any of the above modern innovations into Ancient Astrology.

Eternal gratitude to Robert Zoller for practising and teaching Astrology the way it was meant to – without psychology, karma, and other external beliefs

Robert Zoller repeatedly warned of the dangers of mixing Astrology and other unrelated disciplines. It is no coincidence that my blog is called 100 Percent Astrology. It is Ancient Astrology that is practised, not psychology, pseudo-philosophy, karma and other no-astrological nonsense that creates nothing but filters. I cannot emphasize how crucial it is to build an astrological understanding based on Astrology only. The ancient philosophical movements are very important because they are in line with Ancient Astrology, but they are secondary. Zoller was adamant about this.

Zoller’s admonition not to be too dependent on astrological software

Another approach for which I am grateful to Robert Zoller is not being overly dependent on astrological software. Zoller taught how to calculate the horoscope and the multiple predictive techniques by hand. He also said that training one’s memory is very important, and hence doing calculations in one’s mind improves one’s familiarity with a technique and ultimately their skills.

Zoller’s insistence that Astrology is not the full picture

Another major insight I learned from Robert Zoller is Big Picture perception. No matter how powerful Ancient Astrology is, the ancient astrologers put it within the Greater Picture. They put it along with its sisters of Alchemy and Magic, which deal with self-cultivation and freeing oneself from fate as much as possible.

Zoller emphasized that while Medieval Astrology can give us the ability to predict people’s fate and our own, and while it opens the door to Wisdom, it cannot, by itself, take one there. It is crucial, for those walking the spiritual path, to align themselves more and more with their immortal part so that the shackles and vicissitudes of the fates seem not as hard. In an audio interview with Chris Brennan, Zoller also said that he had witnessed a few interventions. Unfortunately, Brennan did not ask Bob to elaborate. What this is about is intervention from a Higher/Divine source which trumps the determination of the natal chart.

Another thing I am grateful to Robert Zoller is not having a disparaging view towards divination, as some ancient authors did. While he maintained that Ancient Astrology is the highest science and that its rules must be followed, he also wrote that it is a form of divination/deciphering the thoughts of the Divine. This is much more important than it seems for it allows the student to become open-minded to other astrological systems of Truth, or even to the Tarot or other forms of divination. This is opposite to Morin’s view. Yet Abu Mashar used other divination methods, Lilly was also a magician, and some other astrologers were palmists.

Zoller’s admonition to practise, instead of wasting your time with academics, theoretical discussions or modern innovations

Another thing I learned from Robert Zoller is the importance of constant practice. Of doing a minimum of 200 horoscopes before one can say they have really grasped a given approach or technique. Let the others debate and discuss whether Astrology is a “science”, whether it works, whether it deserves “academic” recognition, what Zodiac to use, whether to use modern innovations, etc.

Lastly, but perhaps most importantly, I want to stress Robert Zoller’s admonition that the student and astrologer should remain humble. It is Ancient Astrology which is infinite, not the human ego. We do not know the truth. The horoscope shows the truth, and we can only read the horoscope through Astrology. It is an honour and privilege to study this highest science, and one should only use it for the betterment of ourselves and others.

In conclusion, as is readily seen by those who can, Robert Zoller had a very afflicted horoscope. He suffered greatly and for a long time from a serious illness (Parkinson). He was also betrayed by partners and friends who turned out to be his secret enemies. Yet the zeal with which Zoller pursued his studies and practice was phenomenal and admirable. The passion with which he taught Astrology and shared his wisdom left an indelible imprint in the souls of many people. I am only one of them. He had his Ascendant ruled by a Jupiter in Scorpio, and so do I. He had the lord of the Ascendant in the 9th, I have the lord of the Ascendant conjunct the lord of the 9th.

Robert Zoller remains my biggest astrological influence to this day

Though I never had the pleasure and honour of meeting Robert in person, to this day, 12 years since I started studying Astrology, Zoller remains my biggest influence and foundation. This is despite the fact that after taking his courses on Medieval Astrology 10 and 8 years ago, I have subsequently studied Hellenistic, Babylonian, Indian, and Chinese Astrology. As long as I and the many other students of Robert Zoller, spread across the world, live, we will preserve and continue the legacy of this remarkable man. I feel this is an apt way to conclude my tribute to astrologer Robert Zoller.

Bob, may you get to meet your favourite astrologers, alchemists, magicians, and occultists on the astral plane.