This article is about the stars in Chinese Astrology: what they are, how they are calculated and how NOT to use them. I exemplify these points with the charts of three world famous sports people.

What are the stars in Chinese Astrology?

The stars are not real astronomical bodies. They are derived from the BaZi or Zi Wei Dou Shu chart. They are somewhat like the Lots in Ancient Astrology. Just as there over 100 Lots, there are over 200 stars in Chinese Astrology.

How the stars in Chinese Astrology are derived

The stars can be derived from any of the four pillars of the BaZi chart, but they are mostly derived from the year, month, and day pillars. There are so many stars that one can get really overwhelmed with information and variations.

The Nobleman aka Heavenly Messenger aka Guide star is considered to be the most fortunate star in Chinese Astrology. It can be derived from the Day Stem or Year Stem. I myself use the Day Stem only.

Here is a table of the Nobleman star in BaZi: 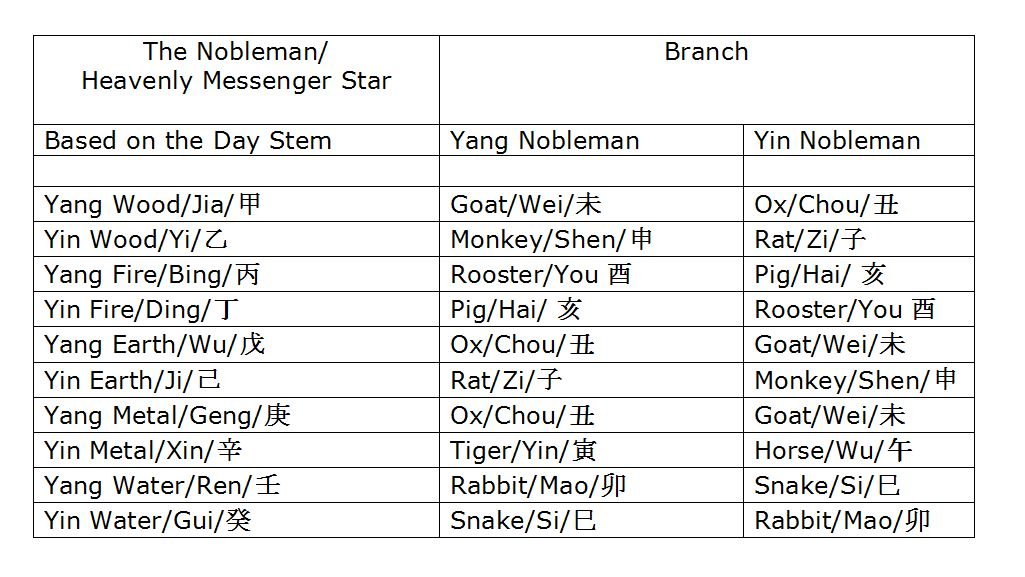 As an example, someone born on a Yang Fire day will have the Rooster and Pig as Nobleman stars. They can be in any of the four branches of the chart. The Rooster is the Yang Nobleman, while the Pig is the Yin Nobleman star.

If that person does not have either of them in the chart, when the Rooster or Pig appears in a the Luck or Annual Pillar, then the person will experience the effects of the star.

I have already written about this, and I will keep repeating it because it is the most important factor when practising the BaZi branch of Chinese Astrology. I mean that, unlike Western Astrology, where one can read the chart, as well as incorporate the Lots, in Chinese Astrology one first must determine the chart structure. This is because the vast majority of the delineation depends on whether a given element, stem, branch, star is favourable or not to the native.

The thing is that determining the chart structure is the most difficult thing to do in Four Pillars of Destiny. As such, and because it is human nature to look for shortcuts, people are tempted to want to apply right away when they learned. It is much easier to look at a table, derive the stars, read their meaning and apply it to actual charts. It is immeasurably more difficult to categorize the chart. Not just that, but to figure whether the chart structure remains the same for the whole life, or whether it changes at certain stage in life, or even whether it goes back and forth.

How NOT to use the stars in Chinese Astrology

There are BaZi teachers, who, in their desire to simplify the material, as well as to satisfy the impatient curiosity of their students, give the tables for calculating the stars before they have taught how to classify the chart. Now I understand that modern culture, the alarming addiction/dependence on technology, and the decreasing attention span are counter to true and committed learning, and perhaps some compromises ought to be made. I also understand that perhaps not as many people would be willing to study a subject for weeks and months before being able to practically apply they have learned. And this is partly why those teachers want to give their students some knowledge that can be immediately applied. In fact, it has become almost customary to do so in lectures and books. Why? Aside from providing some practical value, in a lot of cases, this is a marketing trick that exploits the reciprocation principle. For more, I strongly recommend the book Influence by Robert Cialdini.

Getting back to the topic, by opening this “Pandora’s Box”, it is difficult to have the student not use the few dozens of stars in BaZi anymore until they learn how to determine the chart structure.

The Nobleman/Heavenly Messenger star is very often given as one people can immediately use. This is because one of its major meanings is mentors and guides that help us. Another meaning is protection, good fortune, removing difficulties and dangers. It also promises fame, success, and high position in society.

So people are told they can get guidance and useful advice from others born on in year, month, day or hour. In the example above with a person born on a Yang Fire day, those people who have the Rooster or Pig in their charts, will be of great benefit to that native. So far so good.

I want to specify that by success, I mean measurable, tangible achievements. It is because we don’t know, for example, whether or how a person gets rescued or to what extent the advice they receive from their mentors turns out to be a decisive moment in that native’s life.

Spaniard Rafael Nadal is one of the most successful tennis players in history. Below is his Four Pillars of Destiny chart: 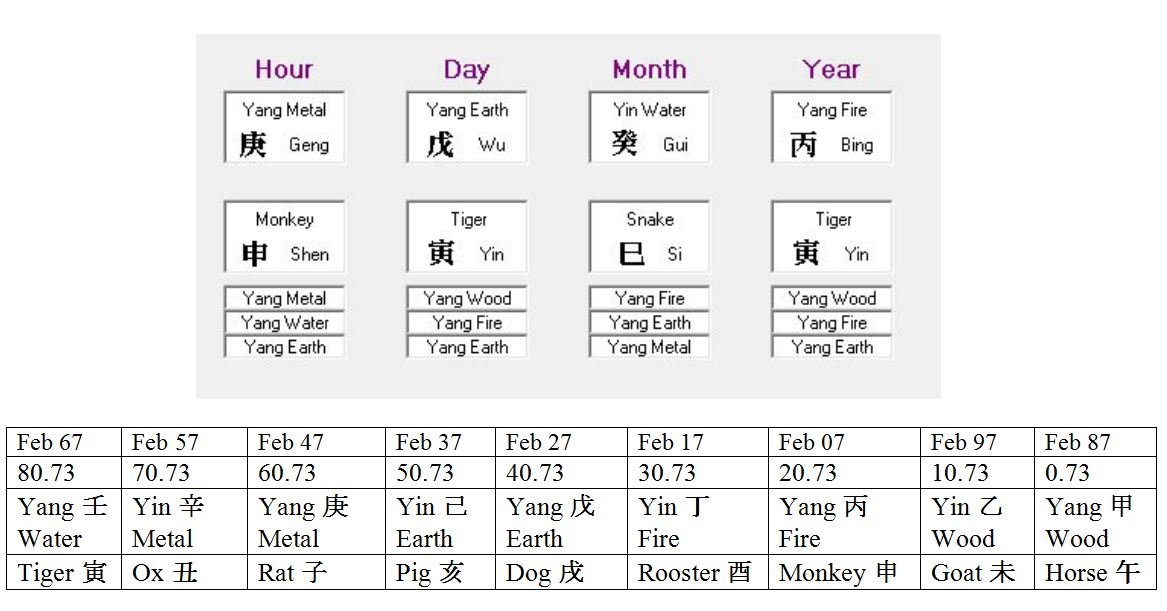 Nadal’s chart falls under the category of special charts. That is to say it is not a regular chart. It is Transformation chart as the Day Master Yang Earth combines with the Yin Water of Month Stem to make Fire. The combination is successful because he is born in the summer and Fire and Wood are the most prominent elements, with Wood producing Fire and strengthening the combination. Transformation charts are considered top notch in terms of quality. True Transformation charts are very rare. Most are fake ones. What this means is the Controlling/Wood and Resource/Seal/Fire elements are the most favourable for Nadal.

Having said that, Nadal’s BaZi chart has benefited, in certain periods, from the Rooster/Metal and the Rat/Water. For example, he won 3 Grand Slams in the Yang Earth Rat year (2008). He also won 1 Grand Slam in 2005 and 2 in 2017 (Rooster years).

The most negative element for Nadal is Earth/Companion. The Monkey is also extremely negative as it clashes the two Tigers. For this article, however, I will above all examine what happened in the years of the Yin Earth Ox (2009) and Yin Wood Got (2015).

Nadal was born on a Yang Earth day. Checking the Nobleman table, his Nobleman stars are the Goat and Ox. Therefore, he should have tremendous success in those years. He should earn more wealth and climb higher in position. True, BUT only if the Nobleman star is a favourable for the chart. In Nadal’s case, they are the most negative of all because both the Ox and Goat are Earth.

Now, someone would say that the Ox combines with the Snake and transforms into Metal, but I say note that the Yin Earth is on the Annual Pillar, which emphasizes Earth, not Metal.

After winning Roland Garros for 4 years in a row, Nadal was defeated in Paris for the first time in his career. More than that, Rafa did not win a single Grand Slam. I remind that the Chinese year starts from 4-5 February, so after the Australian Open.

After winning Roland Garros for 5 years in a row this time, Nadal was defeated in Paris for only the second time in his career. And again, more than that, Rafa did not win a single Grand Slam.

American Tiger Woods is one of the greatest golf players in history. He is one of the few sports people who became a billionaire.

Here is his Four Pillars of Destiny chart:

Tiger Woods also has a special chart. It is not a Transformation one but a Follow/Surrender one. However, it is Borderline Follow Wealth which means the chart energy is not pure enough. He needs for Water and Wood. Any Earth/Resource and Metal/Companion would be devastating.

Tiger was born on a Yang Metal day, so his Nobleman stars are again the Ox and Goat.

2009 was the year of the Yin Earth Ox. If his chart was standard and he was a weak self, Woods would have benefited tremendously from the Resource element of the Ox. Moreover, it is his Nobleman star. What happened?

In November-December 2009 it turned out that Tiger Woods had had affairs with dozens of women. His seven-year marriage ended in divorce and Woods lost over $100 million in the divorce settlement. His reputation was tarnished, many of his sponsors left him.

Not that many charts show such severe blows by the Fates. Woods had earned big and he lost big. Of course, there are many indications for success, wealth, relationship problems and loss of status in Tiger Woods’ chart, but I don’t want to digress.

American Kobe Bryant is one of the greatest basketball players in history. He died tragically in January 2020. Here is Kobe Bryant’s Four Pillars of Destiny chart: 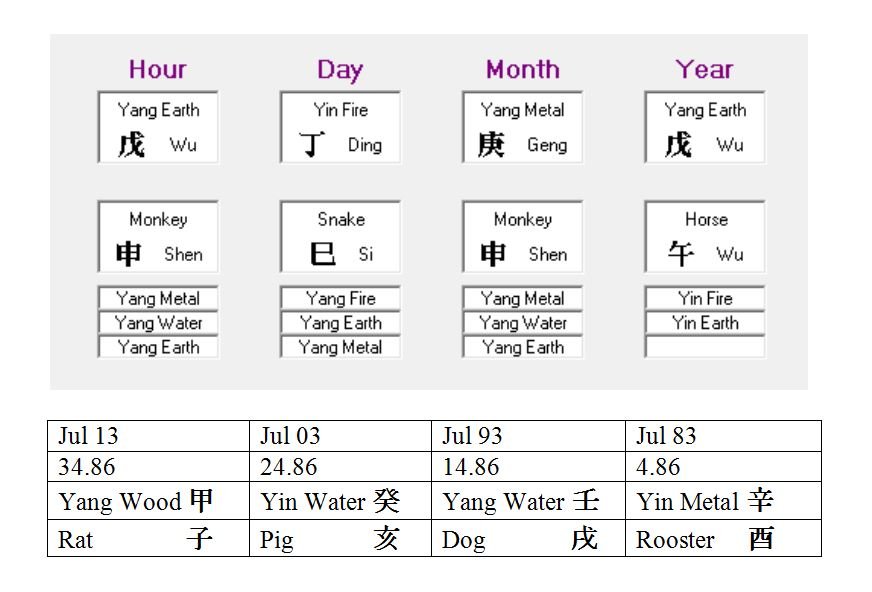 I will be brief as I already wrote a detailed article on him, which you can read here.

For our purposes, Kobe also has a special chart. He follows Wealth. The most negative elements are Wood, Fire and any element that would break the Metal chart structure. I mean, the Pig, the Rat, the Dragon.

Kobe Bryant was born on a Yin Fire day, which means his Nobleman stars are the Pig and the Rooster.

Kobe Bryant died in the Rat cycle and Pig year. The Rat forced the Monkeys to combine and transformed them into Water, while the Pig clashed/destroyed the Snake. The entire chart structure was destroyed. The Pig is Kobe Bryant’s Nobleman star and yet he died during such a year.

Again, when the Nobleman star is negative or most negative, it cannot  bestow its gifts, one of which is to protect.

Undoubtedly, the stars in Chinese Astrology are very important and must be used. However, to utilize them properly, one must first learn how to determine the structure of the BaZi chart. As I showed in this article, failure to do so can cause huge mistakes in delineation and prediction.