It is with great pleasure and excitement that I am writing this article about the HOROI Project. It was initiated by Levente Laszlo in May 2020 and deals with translation of ancient Greek astrological texts to English.

Levente Laszlo – the man behind the HOROI Project

Levente Laszlo is a classical philologist from Budapest, Hungary who specializes in the textual history of Hellenistic, Roman, and Byzantine Astrology. He has been contributing to the Skyscript Traditional Astrology Forum for the past 14 years. As such, not only is he sufficiently educated to translate these ancient Greek and Byzantine astrological texts, but we have a scholar who is sympathetic to Ancient Astrology. That, my readers, is a big exception and great news for the astrological community. Anyone can read Levente’s insightful and very useful comments at the above forum. I have never met him, but his credentials and record speak for themselves.

More than that, Levente Laszlo has a serious interest in Ancient Astrology. As a result of it, he knows the ancient astrological texts, which of them have been translated, whether the translation could use some improvement, which ones are yet to be translated, etc. This is very valuable for the Project because it saves a lot of time. I mean, throw just about any scholar who knows ancient Greek and Latin, but is not familiar with the above information, and the quality of his/her translations will not be as high. Nor will their contribution for the restoration of Ancient Astrology, precisely because they will not know of the already translated works, as well as what the astrological community needs. I mean, let’s face it: it is not about doing translations of just about any text. It is about translations of texts and concepts and practices and fragments that further educate those strongly interested in Ancient Astrology. There is a hierarchy of texts. Some are more important and useful than others.

As of today, 10th of August, 2020, Levente has already translated and made available materials from the following ancient astrologers:

If you have some suggestions on ancient astrological that are worth translating and would add a valuable contribution, please leave a comment here or write the translator Levente Laszlo himself.

The reason I am excited is because the astrological community once again has a man of calibre that is sympathetic to our cause and genuinely interested in contributing to and restoring out great science. I mean, after Guiseppe Bezza’s death, the astrological community lost a big figure. Then James Holden died, and he too had translated very valuable texts from ancient Greek and Latin. Then Robert Schmidt died, and he was absolutely instrumental with his translations and Project Hindsight. Then Robert Zoller died. To my knowledge Robert Hand, the other translator, has not translated and published a text for about a decade.

It was great when Eduardo Gramaglia came along on the astrological scene, and he has been collaborating with Ben Dykes. My point is that, aside from Eduardo, the astrological community did not have a sufficiently qualified translator from ancient Greek. As much as American astrologers Demetra George and Chris Brennan claim to know ancient Greek, to my knowledge, over these past 15 years, neither of them has made a single significant contribution in terms of translation. 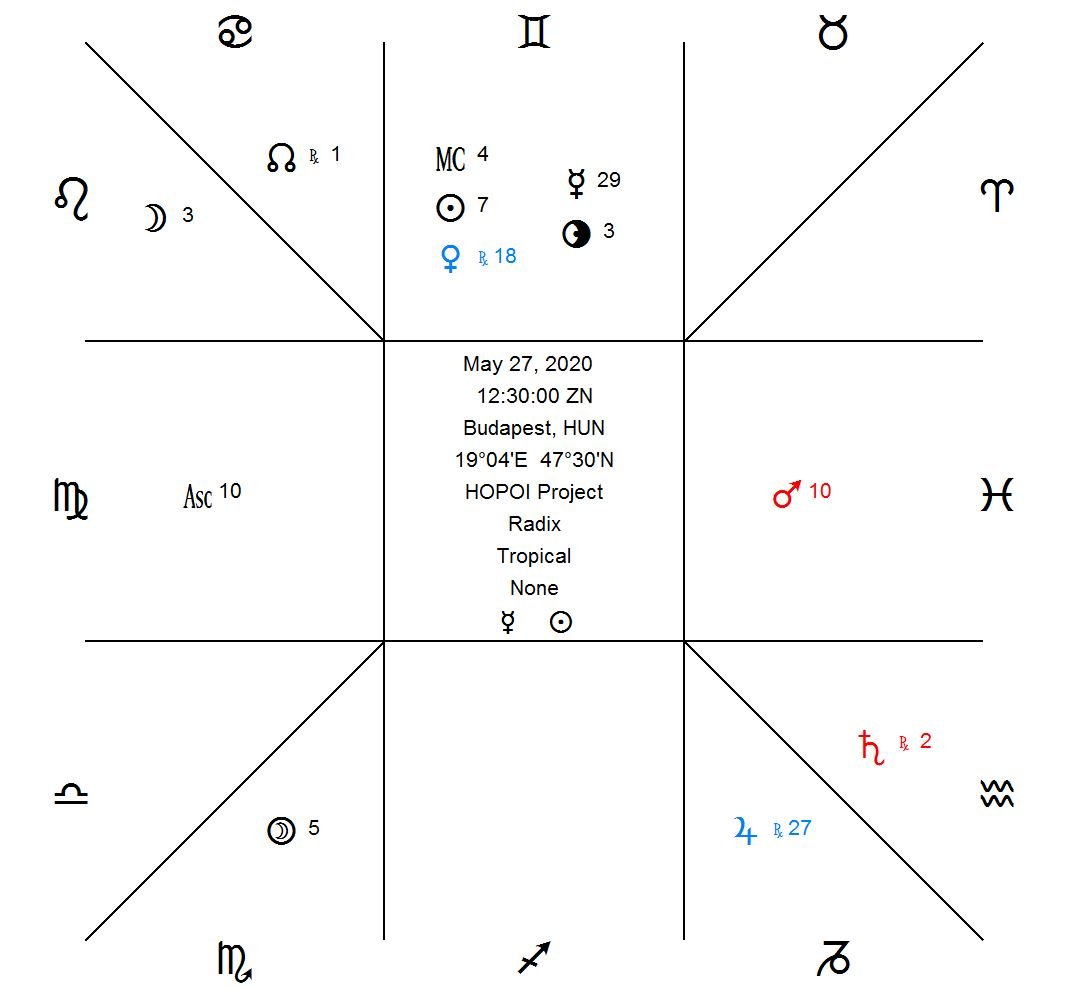 I just learned of the HOROI Project these past few days. The name of the Project comes from a now-lost book “Definitions”, which is attributed to Petosiris, one of the legendary founders of Hellenistic Astrology. As the first date the website published a material is May 27, 2020, I calculated this chart. It is not an election chart. I use it just for illustrative purposes.

The Project is entirely funded by the astrological community. I immediately joined. Payment is made by the secure website Patreon. Here is the HOROI Project’s website:

I should mention that Chris Brennan is advising Levente, and Brennan does have excellent knowledge of Hellenistic Astrology’s history. Also, academic and astrologer Martin Gansten and Robert Zoller’s student and American astrologer, Steven Birchfield, are also members of the advisory board. Therefore the Project is in good hands.

The reason I am supporting the HOROI Project is because:

Please join and support the HOROI Project. It can done as little as $5 per month. Levente says even $1 per month will help and “grants unlimited access to the texts“. This is getting the texts for a fraction of the cost if one were to purchase the translation from an academic. Just check the prices of Brill or other publishers.

Unlike Project Hindsight and other translation projects, the texts of the HOROI Project are accessed online; no printing of the material is offered. This reduces cost and time.

I am writing this article to spread the word and urge astrological practitioners from around the world to support this initiative. So far, 75 people have joined since the beginning of the Project about 10 weeks ago.

Why support this Project

The vast majority of ancient astrological texts lie untranslated in libraries around the world. The academics do not care about them. However, as astrologers, we should care. Because this is the legacy of our craft and our past colleagues’ efforts should not go in vain.

Let’s face it: what is the alternative if we, as a community, do not help ourselves? Rely on the charity of the Vatican to actually translate its own digitalized manuscripts and hope that some of them will contain astrological works? Do we know whether this will ever happen? Of course not. Life is short. Many of these manuscripts will probably outlive us all.

Now is that time to make a difference!