This article is about Indian vs Western Horary Astrology and how the 17th century Indian horary book Prasna Marga differs from the classical horary works of the West.

I have been recently dealing with horary Astrology. As I was doing some charts, I felt like revisiting horary’s Astrology’s philosophical and metaphysical dimensions. As I was rereading parts of Bonatti, Sahl, Umar, Al Kindi, Masha’allah and others, one thing led to another and I came across a book on Indian horary called Prasna Marga. Prasna is the term the Indians use to denote horary. So whether you call it Jyotish horary, Indian horary or Prasna, it refers to the same branch of interrogations/questions: the lowest one in the astrological science.

I will disregard the Zodiac question because horary is divination to a great extent. In horary Astrology, it is more important what system one chooses to follow, and to stick to it, rather than some differences in methodology. Needless to say, no one can blatantly disregard the fundamental rules. And yet, horary allows a far greater leeway than electional Astrology, the next branch, let alone natal or mundane.

For those that do not know, this is how a (Northern) Indian astrological chart looks like: 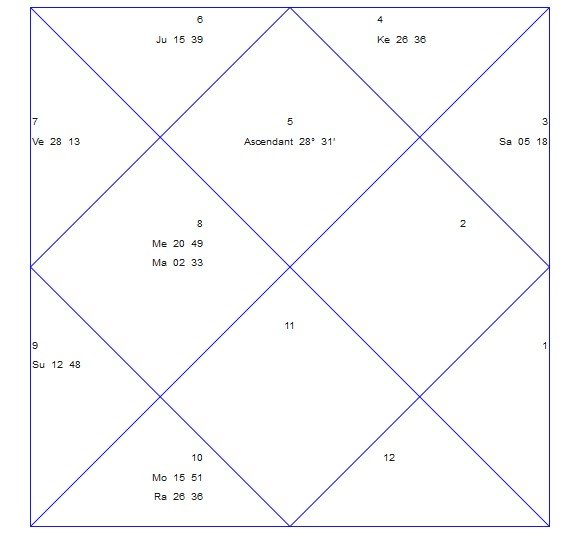 And this is how a South Indian astrological chart looks like:

My thanks to this website for the free charts:

My goal in writing this article is to stimulate Western/non-Indian Astrology practitioners, not just horary ones, to read Prasna Marga. I could write a very long article to do this book justice, but I am not going to. I want you to read the book, which I strongly recommend. As such, you yourself will judge its philosophical as well as practical merits.

My purpose is not to frame the question of Indian vs Western Horary Astrology, in the sense which one is superior. It is to note the differences in the Indian approach and to appreciate them.

Advantages of the book Prasna Marga

Prasna Marga is a very big and extremely detailed book. I have to say that it not only deals with horary but with natal Astrology as well. After all, a lot of the rules and aphorisms in horary can be, and should be, applied in the natal branch.

I had read about Jyotish horary from Hart de Fouw and how comprehensive it can be, but I have to say I did not expect it to be that thorough. Even if you have read the largest Western horary book, namely the Nine Judges translated by Ben Dykes, plus Bonatti, Lilly, etc, in reading Prasna Marga you will be amazed at the amount of detail that is given. I am not one to be easily impressed, but this Indian book is something that can take one’s breath away. I read all the horary parts for a few hours without taking a single break.

By “impressed”, I mean not so much the astrological rules pertaining to the chart, the intra-chart rules, the hundreds of aphorisms on pretty much any topic one can think of. I don’t mean them, because they are preserved in the Western horary books. (Some of them are similar to those on thought interpretation given by Herman of Carinthia in the Search of the Heart translated by Ben Dykes).

What I mean with Prasna Marga is the totality of the Indian approach to horary Astrology. This approach considers the moment of asking the question to be unique. As such, not only the astrological chart but the world outside, as well as inside, gives all kinds of information on what is asked about. Here are some of the factors that are considered:

Indian vs Western Horary Astrology: my issues with Prasna Marga

As much as I am impressed, I have to mention what I consider to be the negative side not just of Prasna Marga but of Indian Astrology in general. There are so many rules and aphorisms that, at best, could, theoretically at least, allow the astrologer to reach an amount of detail that seems impossible. At worst, howevr, they could turn the astrologer into an absolute slave/zombie to these authorities and rules.

And I am not even getting into the worshiping part which is oriented towards the lower astral plane and its repercussions. My point in criticizing Prasna Marga is that one is given hundreds, if not thousands, of rules. They are probably for any conceivable topic, and from a number of angles. And yet, what does this leave the astrologer or student himself/herself?

Why this strong need to control the environment? What will happen if the answer is indeed negative? After all, given how many factors can be taken into account, the odds are higher that the final result will be unfavourable. So what? Hearing bad news is not the end of the world. What about learning from the negative outcome? How about accepting fate and being open to what you are presented with next? These are very significant questions which deserve a discussion.

Conclusion on Indian vs Western horary Astrology: the need for Metaphysics and Philosophy

In the interest of impartiality, I am not saying the ancient Western horary books are the opposite and full of advice for the querent.  What I am saying is I had never come across such fervent desire to make the outcome known before even meeting the client and erecting the chart. What I mean is the obsession of looking for the positive outcome. It is here where Metaphysics and Philosophy must come in.

In conclusion, I do recommend that my readers read Prasna Marga but be prepared for a strong response. This book will either appeal to you greatly or it will be a big turn off.