“What, then, is this hidden language, and by what means can we, on earth, not only read heaven’s golden alphabet bur read the lessons, warnings and revelations alright”?

This article examines how easy it is to give a horary Astrology reading vs having to deal with very advanced Ancient Astrology, like Vettius Valens or Abu Mashar’s mundane Astrology.

I have been lately doing some intense regrouping, systematizing and rereading of my library of Hellenistic and Medieval Astrology. Naturally, I faced again some very murky and cryptic passages, especially in Valens himself and his quotes of Nechepso the king. I also encountered others in Ptolemy, Masha’allah and Abu Mashar, but to a lesser extent.

To illustrate what I mean with this article, let’s take the topic of eminence, or put another way – how high the native will reach in their life in society. Whether they will stay at the level of their parents, whether they will become someone very influential etc etc. So as I was regrouping the many indications for eminence described in the ancient texts, I could not help but notice the gradations that existed. By that I don’t just mean the social mobility from one level to another, but the various gradations of classes within a given level. I find it difficult to put this in words.

What I am ultimately trying to say is that there is eminence and there is Eminence; there is Astrology and there is ASTROLOGY! So as I was reading about rich and powerful persons having rulership over life and death, I also read of generals seizing whole regions, and then about kings… and then I read Abu Mashar’s On the Great Conjunctions and his eminence configurations. I mean those about Prophets and kings subjugating entire continents and ruling with absolute power and being accepted by the people etc etc. What I am talking about is the difference between not only the various levels of eminence but of the various branches in Astrology. So what looked like a very powerful chart, it really was, but only at the natal level. Because when I went to the mundane level, it was like the scale went up from 4 to the most eminent natal charts to 10 or even more!

That is the context within which I am writing this article. So as I was dealing with those highest celestial matters and being completely in awe, a client wrote me about a horary Astrology reading pertaining to a romantic relationship. Now, I have not dealt with horary lately and have been so consumed by murky passages, be it about the calculation of the length of life or predictive techniques in Hellenistic and Medieval Astrology, that I had kind of forgotten how incredibly simple and easy horary Astrology is. 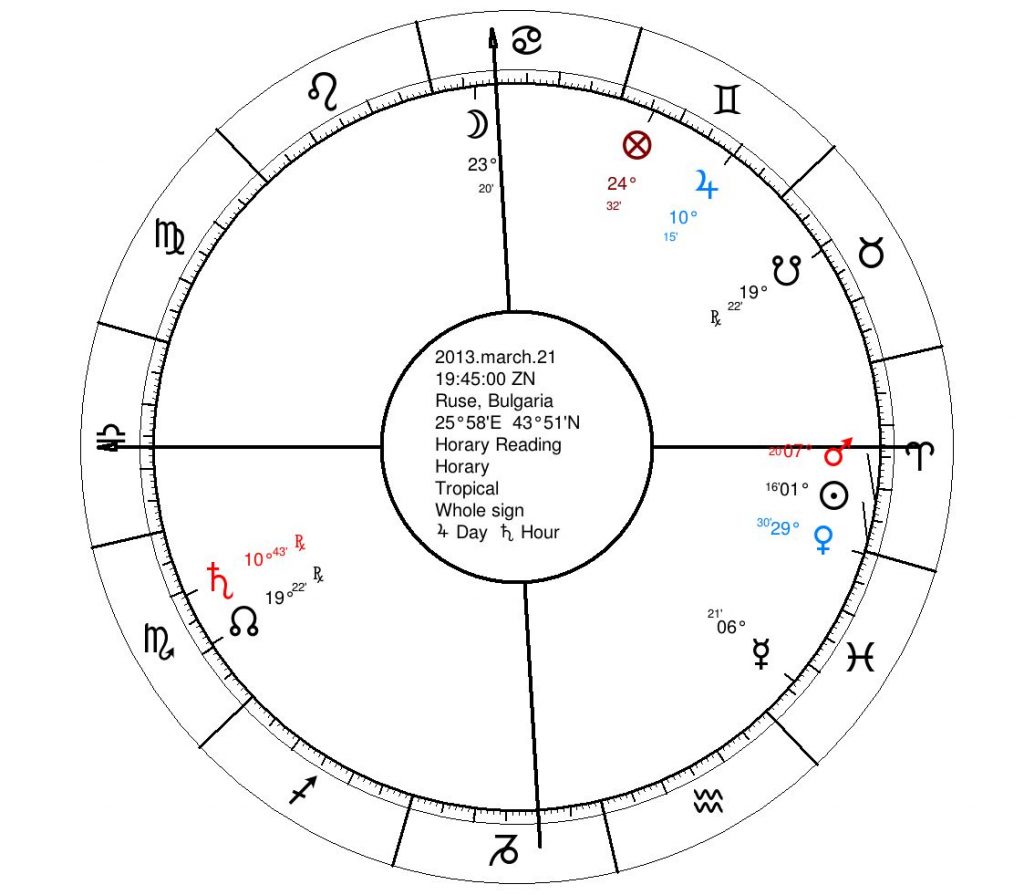 As I understood the client’s question and cast the horary chart, even though it turned out that 6 out the whole 7 planets were in play, plus a Lot, it took me very little time to completely analyze it and come up with the answer.

What I mean is that horary Astrology is indeed extremely valuable, efficient and always shows the truth and the correct answer, provided the question is sincere and concerns the querent in some way. But one must remember that horary is only the entrance, the first step in the field of Astrology. I am writing this because this fact seems to have been forgotten or neglected. Yes, predicting the future, finding lost items or what not with horary Astrology, or finding out the past in a reliable way is invaluable, but this need not stop one from seeing the Big Picture and the scope that Astrology has.

Why I disapprove of astrologers putting initials after their names of calling themselves “master”, “bachelor”, “craftsman”

I have always disapproved of astrologers putting some initials after their names in order to evoke respect or awe of their knowledge, just like modern “scientists” do. As if that were a criterion of their skills. None of the ancient astrologers had these initials or needed these and yet many of them served in royal courts or were consulted by popes or nobles or aristocracy etc..

The point is that too many modern people do so: “master”, “craftsman”, “bachelor” or what not, and given the scope of what I mentioned I find this really amusing and ego related. This is because in a certain way mundane Astrology is much bigger than natal compared to how bigger natal is to horary and electional.

And to have such people parade their titles, especially in horary (and even in natal) is very small minded indeed. Horary Astrology is just a beginning; it is really for children compared to what comes after it. Yes, it can be tricky (I have an article about it which I need to translate in English), especially when one looks for particulars as in lost items, but as a whole horary is so easy that it beggars belief.

Please don’t get me wrong. I am not denigrating horary Astrology in no way. I will never give up my horary practice, I am just putting horary in the right context.

Of course, if anyone has had a different experience then I would challenge this person with some murky passages and see whether they can crack those, keeping in mind that many generations of practitioners of Astrology have not been able to, while some have even given up in despair.