As I wrote in my previous article Chart Rectification and Abu Mashar, Ben Dykes recently published his long-awaited full translation of Abu Mashar on the Revolutions of the Years of Nativities aka Persian Nativities IV from the original Arabic. It is by far the most detailed and comprehensive book on Ancient predictive Astrology which has survived and been translated in a modern language (To be thorough, Aben Ragel’s book is longer but is not as thorough).

I would also like to say that Abu Mashar did not invent the system of annual predictive techniques. He quotes older sources Persian and Hellenistic sources. This points to the intimate relationship between Hellenistic and Perso-Arabic Astrology.

However, be that as it may, even though Persian Nativities IV is over 600 pages, the book has one major drawback – it does not contain a single example chart. As disappointing as this is, knowing what we know about how the books were written back then, it is not that surprising. To be exact, there is a chart on page 290, but Ben Dykes himself urges the readers to ignore it, and with very good reason.

In fact, one would have to search hard for ancient predictive astrological books which do contain example charts. Even though quite a number of Arabic astrologers wrote books on predictive methods, as far as I know – and I could be wrong – none of them included example charts.

The only author that I know of, who wrote a book with example charts is Johannes Schoener. Robert Hand, who translated 2 of his books, promised way back that he would translate Schoener’s Book III, which is based on the same Perso-Arabic predictive techniques. He has yet to do so.

Of course, Abu Mashar himself writes that he wrote a book specifically with example charts to illustrate the method, but there are problems with this assertion (see p.148 of Persian Nativities IV). The fact of the matter remains that we don’t still have a book which shows, in detail and with more than 1 example, how to apply the method in its entirety.

Of course, quite a number of astrologers worldwide have been working with the techniques of Ancient predictive Astrology over the past 2-3 decades, but not in their entirety. What I am getting at is getting down to the smaller time units and all the intricacies this entails. 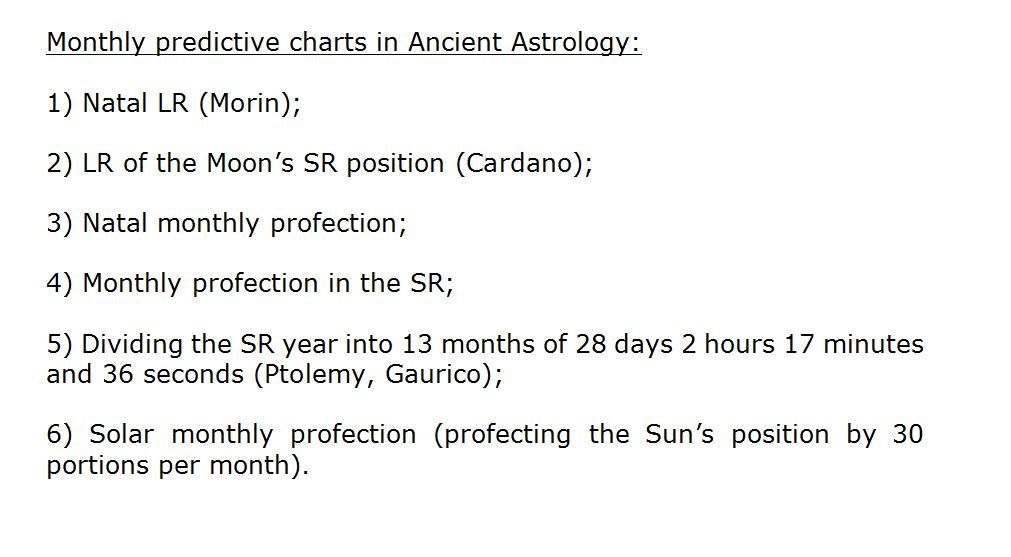 I will not bother with the weekly, daily, and hourly ones in this article. Now, everyone knows of lunar revolutions/returns (LR) as a major technique for the month. A lot of astrologers also know of monthly profections, as derived from the profection itself, for any significator which we wish to profect. What you need to know is that Abu Mashar also advises us to calculate the profection in the solar revolution (SR) as well. Unless it coincides with the natal one, it will have different monthly lords than the natal ones.

Abu Mashar quotes two other monthly methods. One of them is the most widely one in the past, namely SR profected monthly charts. They are based on the Sun natal/profected movement.

The other method (described by Ptolemy) is one I myself call Gaurico monthly SR, because he shows how to use it in his translated book by Rumen Kolev. This monthly predictive method is based on the Moon’s SR position.

The last method is one used by Cardano. It is a LR chart, but it uses the position of the Moon in the SR, not in the nativity. It is also endorsed by Robert Zoller.

I am not going to bother with the Babylonian/Valens method aka the Hellenistic LR.

In summary, and in no particular order, the monthly predictive astrological charts that I want to list are:

4) Monthly profection in the SR;

So what conclusion can be drawn based on all this information? As with in any field, it is one thing to quote sources and methods (in articles, publications, lectures, conferences, or even courses) to gain the respect of your peers and of the community, by demonstrating your thorough theoretical knowledge.  It is quite another to make a choice about which ones are to be used, why, and to demonstrate why this is so and why it works better/more consistently than the other dozens of possible combinations.

In other words, it is going to take a lot of research and experimentation before the thorough system of Ancient predictive Astrology can be restored in its (reasonable) entirety.